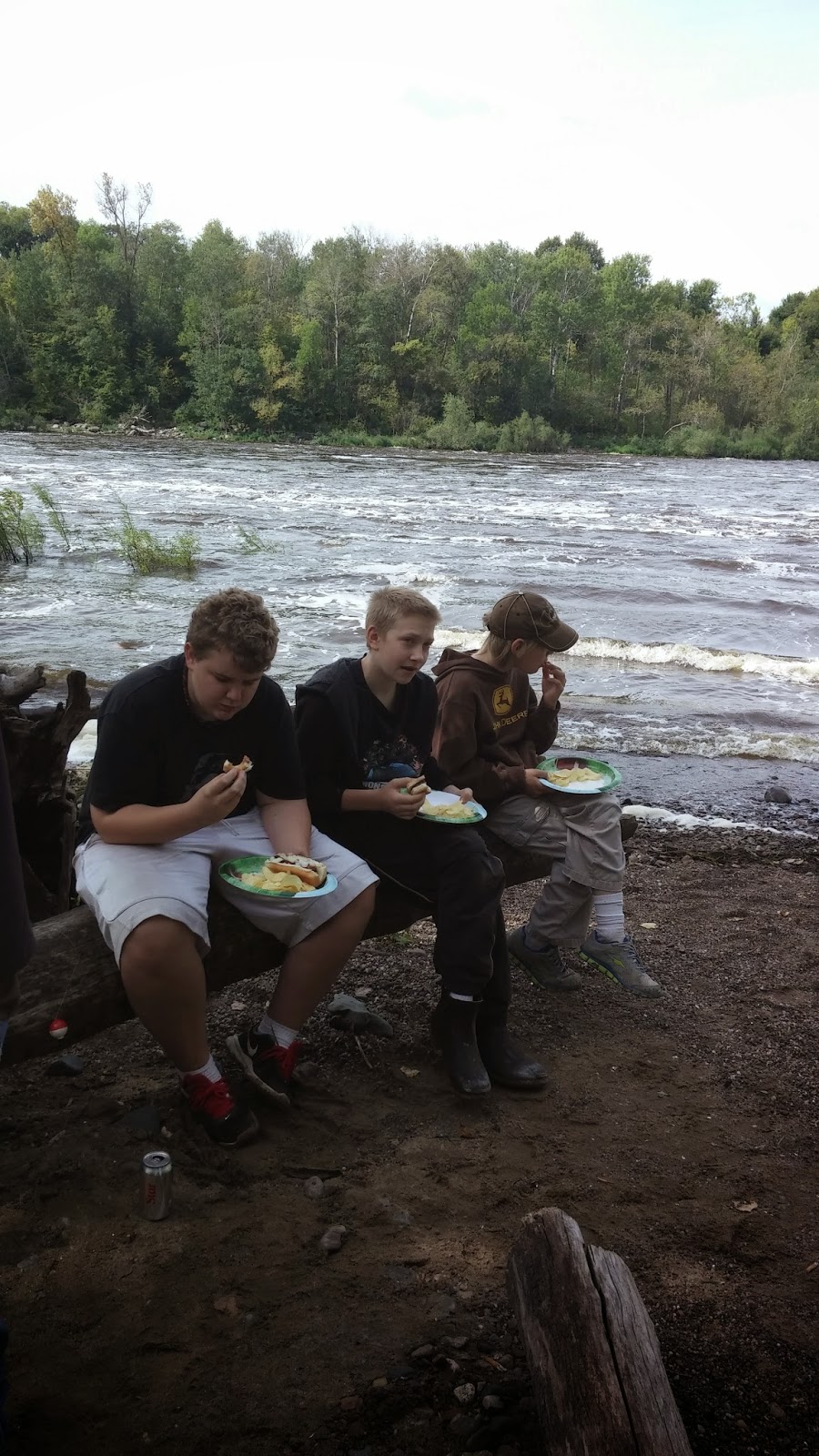 Helmets Required took to the banks of the Mississippi for some fishing and lunch.  Lots of people hang out down there and have fires so we just go down, find a fire pit and start up our own.  This day we made hot dogs.  There is something about cooking food over a river fire that makes it so much more tasty. 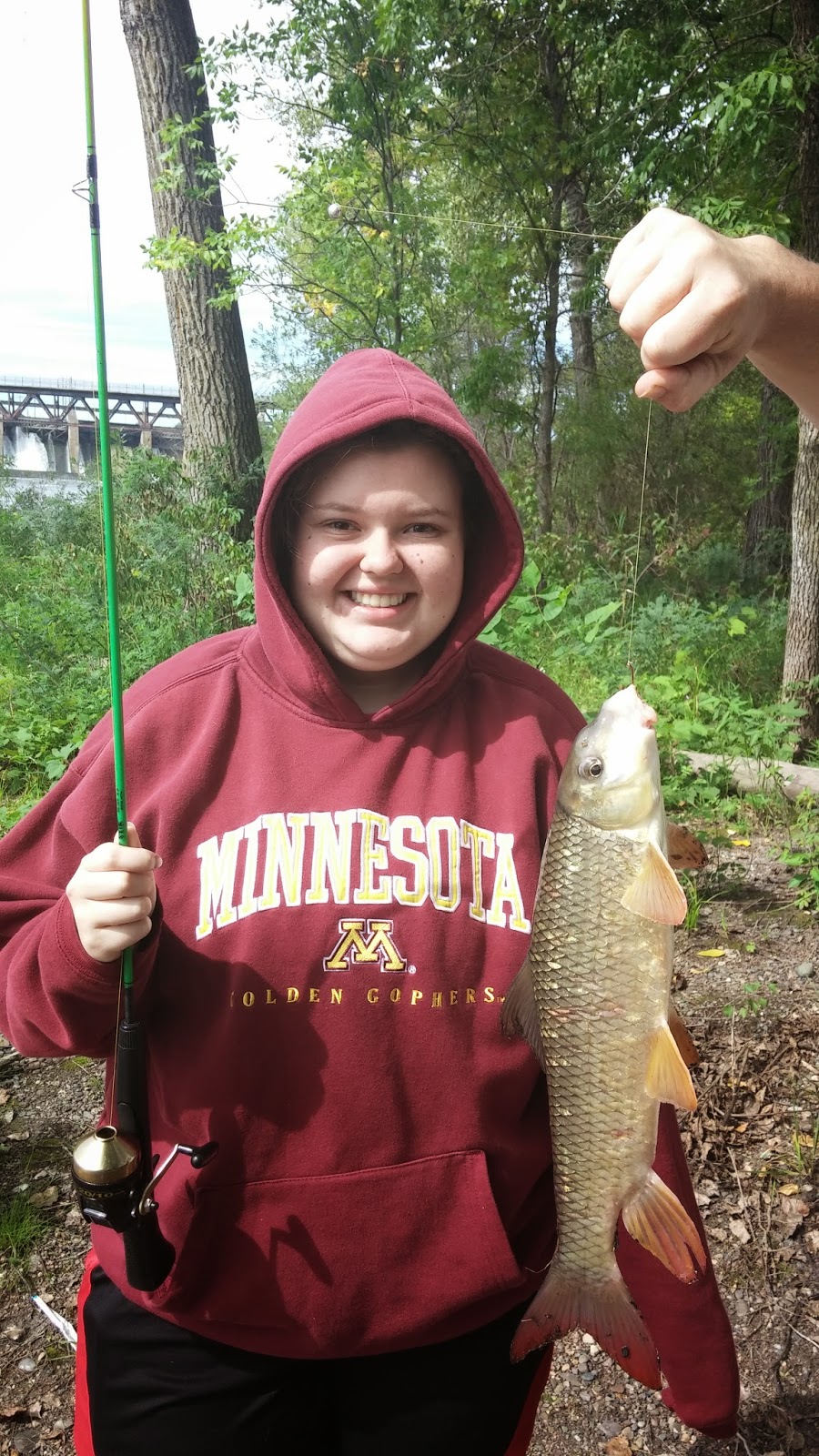 Dancer caught a couple red horses.  It is thrilling to pull these big fish in. 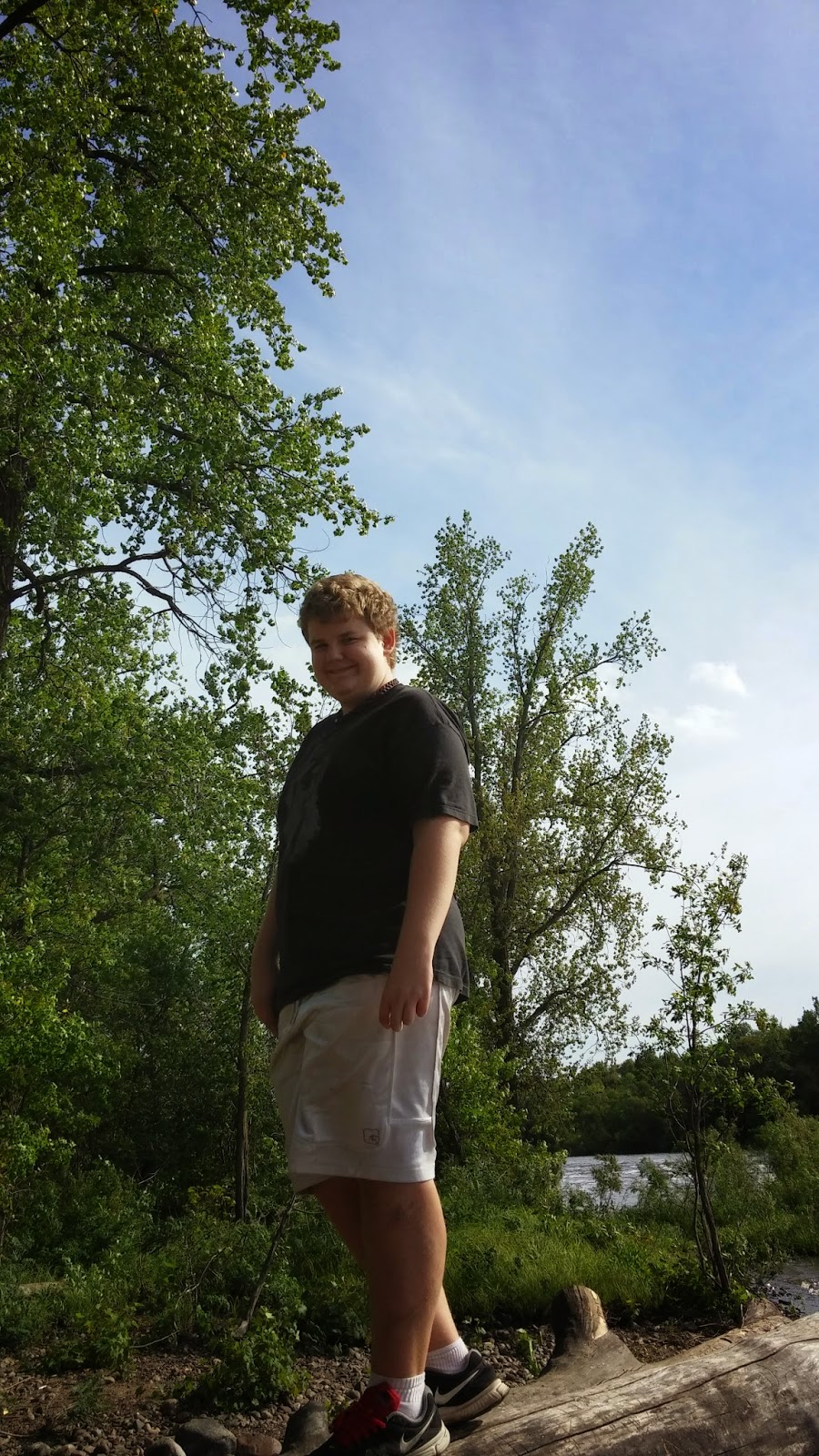 The boys climbed up and down the banks and over the rocks they don't usually fish.  The river is still quite high making the banks much narrower than usual. 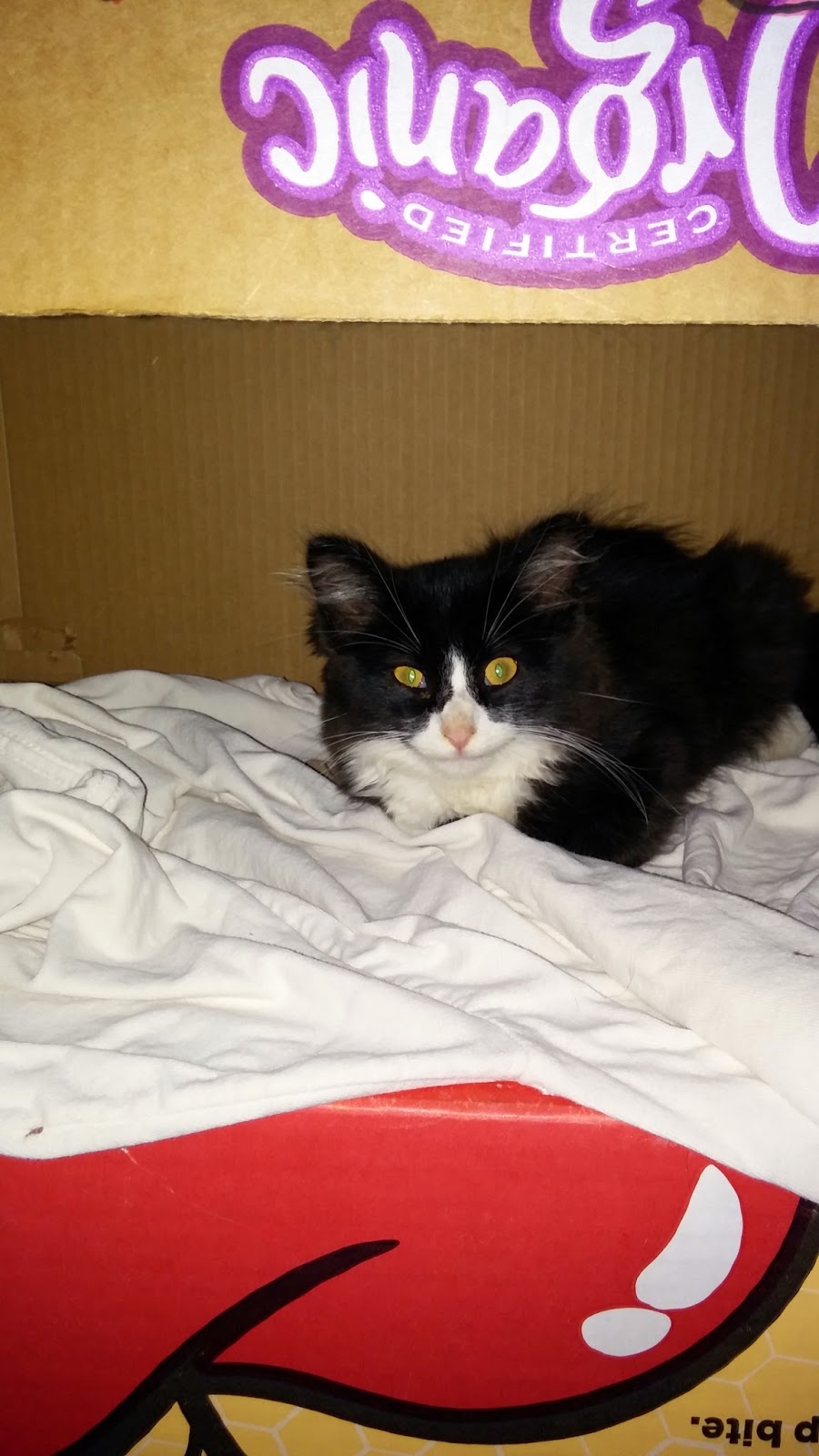 Dancer and I went for a walk when we got home from fishing.  We were just about back home when we heard a cat meowing.  It sounded like a big cat that might be in trouble so Dancer started to call to it, after all it is odd for a cat to meow and meow and meow from the woods.  She kept calling and it didn't sound like the cat was getting any closer and we really started to wonder if it was caught in a trap or something.  She called a few more times and this little tiny cat, I would be surprised it it was even a pound and a half, came racing up the ditch towards us.  It must have been lost in there and it took a while to find its way to Dancer's voice.  It was more than happy to have Dancer scoop it up and carry it home.  When we got it home it made itself right at home, so it was obviously domesticated.  We called our one neighbor that sort of lived by where we picked it up but it wasn't theirs.  A couple days later we saw a little one just like it that had been hit on the road so there there most have been a litter that was dropped off.  The cat acted right away like this living arrangement is going to work for it long term so now we have Chicklet. 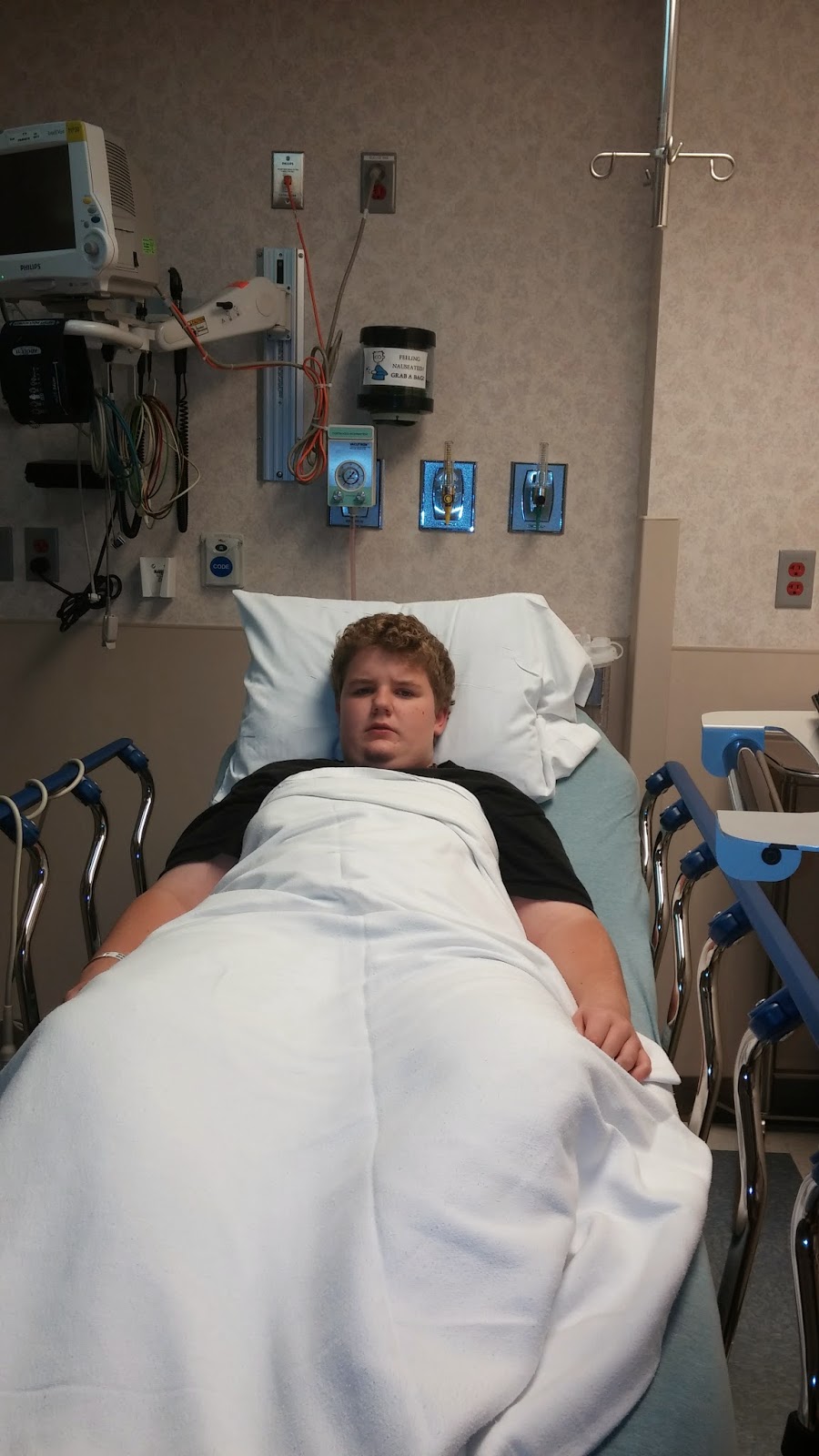 With all the excitement of a new kitten we found that it had gotten dark out but the chores hadn't been done yet.  Spark ran out to do chores so he could get back in quickly and some how fell down hurting his leg.  This sent us to the ER to have it check out. 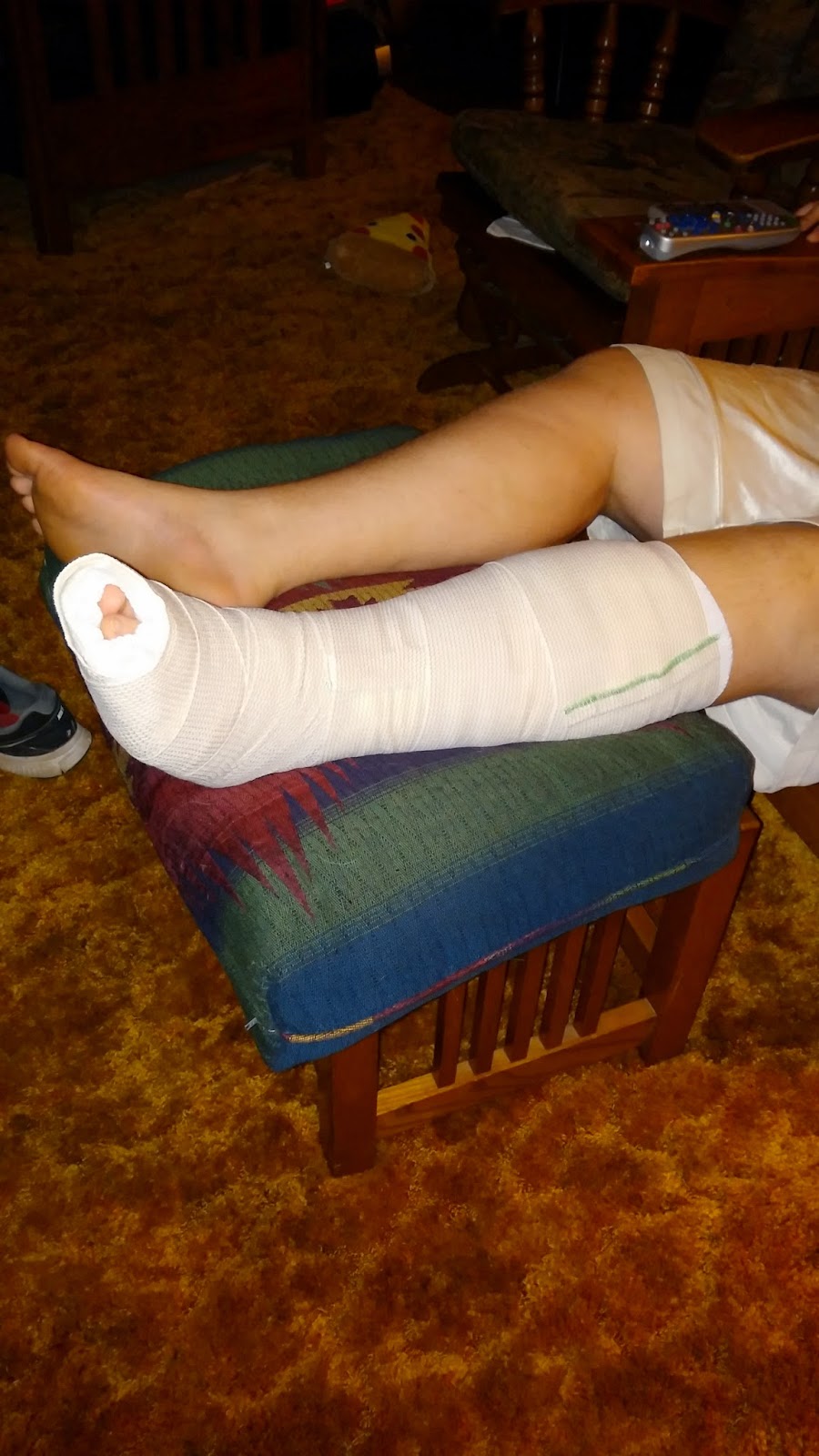 He came home with this and crutches with the instructions to follow up on Monday.  There was no evidence of a break but when dealing with growth plates they said it can take a while for these things to show up on X-rays.  He spent a few days on the crutch and it kept feeling a little better every day so we skipped the follow up.  A couple weeks later and he was as good as new.

It was a long day that ended in the wee hours of the morning after sitting in ER.  I was happy to fall into bed, there had been enough excitement for one day.