Dancer had a friend over night and Dad had lots of things planned for to keep them busy.  Having a few things planned for them to do also makes the night go smoother when there is a little brother involved.  One of the activities was making lots of treats with almond bark. 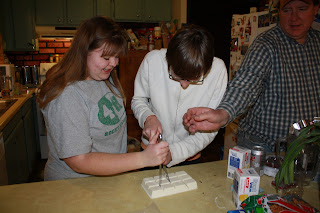 The two girls had quite the time breaking the block of almond bark into squares.  I think when you are 13 years old it is mandatory to add a little drama into everything you do so that may have been part of their problem.  Once they got it into chunks they melted it in a double boiler.  We don't have an official double boiler so we just put a big pot of water on the stove and then a smaller pot on top of it and it works just a good as the real thing.  The other plus to using two pots is that I don't have to store another kitchen gadget in the cupboards. 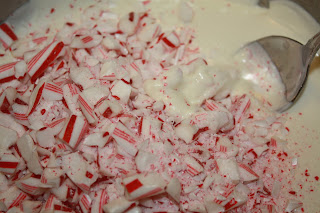 The first thing they made was Almond Bark with Candy Canes.  The only ingredients are almond bark and candy canes.  Unwrap all the candy canes, this is the longest part of the whole process, and put then in a plastic zipper bag.  Smash them with a rolling pin, but don't pulverize them, you want some larger pieces not just peppermint dust.  Pour the pieces in melted almond bark and stir. 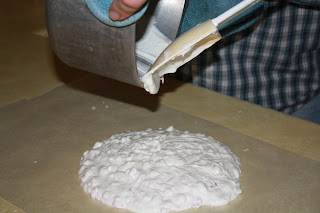 Next, pour it out on wax paper, spread thin and allow to harden. 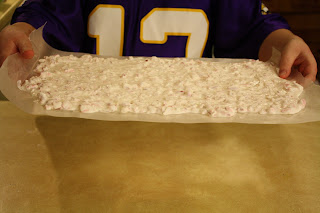 Then comes the fun part.  Pick the hardened piece of almond bark a few inches off the counter and 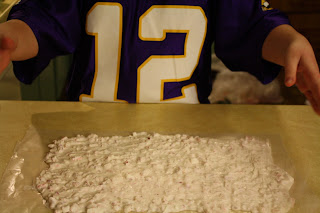 drop it where it doesn't shatter into pieces. 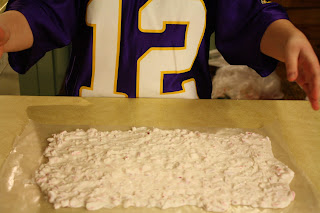 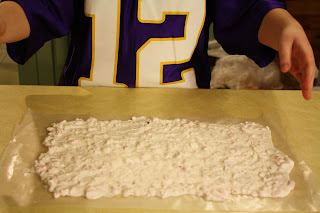 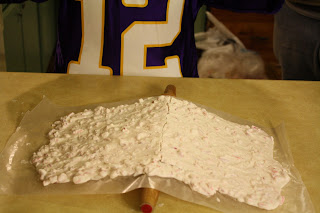 Get out the rolling pin where for sure that will make it break......into two pieces. 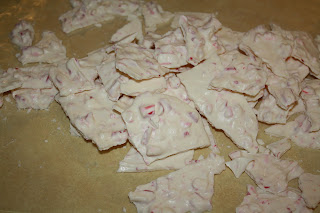 Give up and break it apart with your hands like when putting away a jigsaw puzzle.  This method is not near as gratifying as having it shatter on the counter. 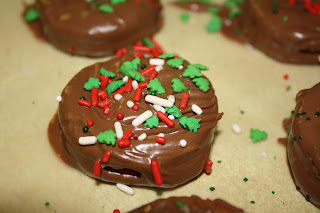 Their second recipe was Almond Bark with Ritz Crackers and Peanut Butter.  I think some people might call these Ho Hos.  Take two Ritz crackers, spread one with peanut butter and put the other one on top to make a sandwich.  Dip these in almond bark, we used chocolate here, and sprinkle with Christmas sprinkles before the almond bark get hard.  These are one of our favorite treats and they are usually gone the first day as they are just so addicting. 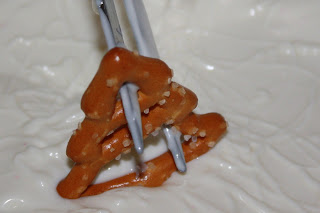 The final almond bark creation was dipping pretzels in the bark.  Again melt in the double boiler.  Dip the pretzels into the bark with a fork. 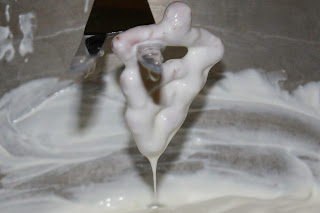 Shake off the excess bark or you just get big blobs ad lay on wax paper. 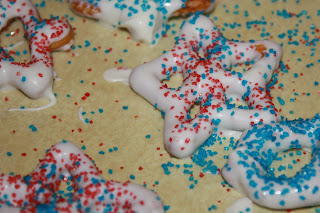 Sprinkle with colored sugar before the bark hardens.  These too are hard to leave alone so I put them in container where they are out of sight and, hopefully, out of mind.
Posted by ~*~The Family~*~ at 3:00 PM