A storm is heading our way tonight and through the weekend.  It will start as rain, odd in December, and end in subzero temps and snow.  Like any family facing a few days of being snowed/stormed in we went out to get a few supplies.

We had Dancer's new camera with on the way to town and snapped a couple pictures. 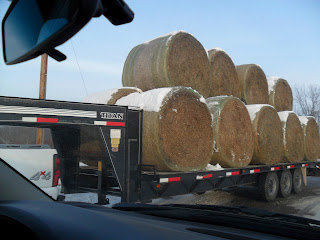 This load of hay was turning the corner by our house.  I didn't take the picture until the truck had gone by because it would freak me out a little bit if someone took my picture from another car.  Wish he was bringing it to our house for a late Christmas present.  Each round bale weights between 600 to 1,500 pounds and equals ten to twenty small square bales, the size we buy.  This truck probably has the equivalent of about 280 small square bales which would last our goats over a year. 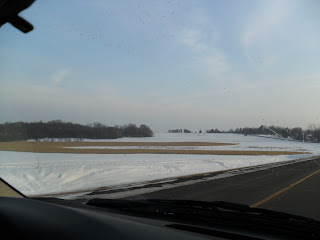 This is a field we often see herds of deer or turkey in. 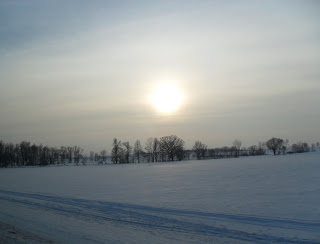 The bottom of this picture has snowmobile tracks.  It has been a great year for the snowmobile riders, lots of snow and warm temps.  I even heard one go by the house other night at 2:00 a.m. 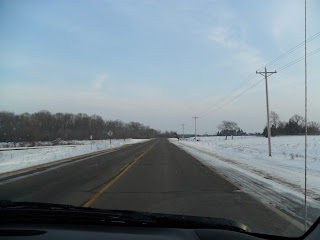 Clear roads.  Hopefully it won't be too long before we see these again.  However, if it rains and then snows it could be months before they look this clear. 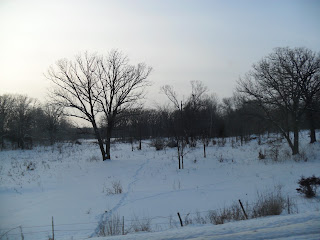 See the little trail down the middle of the picture smashed in to the snow?  That would be where the deer run.  Deer don't just run willy nilly through the woods, they have a sort of a road system.  In the summer the tall grass is parted where they run.  Where we see these along the road we watch closer for them to run out in front of us. 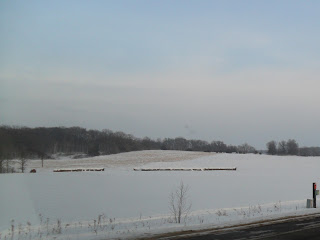 Snow capped hay bales sitting out in a field.  Makes me sick when they leave them until they rot.  I have never seen rotted ones in this field so they will probably bring them in in the spring. 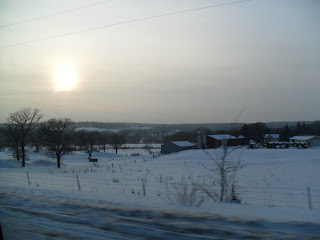 I love this view winter and summer because you can see for miles and miles. 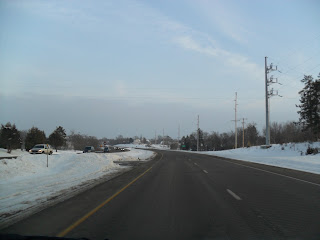 This is the first town we come to and the traffic starts picking up.  The actual population isn't too large, but it is a college town right off the interstate so it marks the end of our serene drive to town, 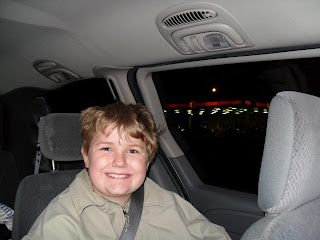 Spark along for the ride.
Once in town we started getting what we needed to weather the storm.  First important stop was the craft store.  I got a punch needle for Christmas and almost have the first project done so I needed more supplies to get me through the weekend.  Second important stop was to find a Wii remote.  Spark got Wii Party for Christmas and we only have three controllers so one person has to watch.  The storm will be a lot more fun if we can all play at the same time.  We got a pretty pink one much to Dancer's delight.  So that was it.  No trip to the grocery store or the anywhere else, just the important stuff to keep us entertained.  Bring on the snow!  Actually this is Dad's weekend to work so we don't want too much snow.  Just enough so he can still get through with his 4-wheel drive.
Posted by ~*~The Family~*~ at 12:06 AM