Our homeschool co-op went to a Heritage Day so we were up and out the door by 7:30, early for us. 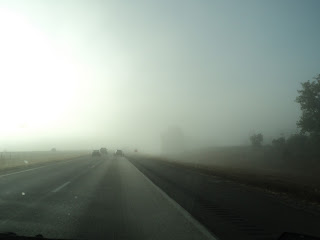 At our house the sun was shining beautifully but when we got about a half a mile from our house there was dense, dense fog.  Then a little further down the road the sun would be shining and it would be clear as clear can be.  The change between clear and foggy was distinct.  Some places we weren't in fog but we could see next to us a spot of fog.  Really weird, I have seen fog is low lying places before, we get that quite often since we live in a wetland area but this was different, eerie different.  This is what it looked like on the freeway, we drove in this for about an hour.  Dancer took this picture as we zipped along so it isn't as dramatic as it looked in real life. 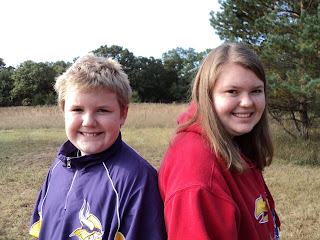 Waiting for our group so we could all go in together, used the time for a little photo op. 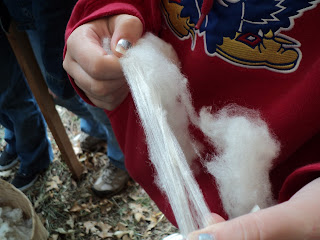 A lady was carding wool into these little bales.  I wonder if we could do that with goat hair?  Probably not because it is wiry.  I did know a lady once that clipped her dog, carded the hair and made herself a hat. 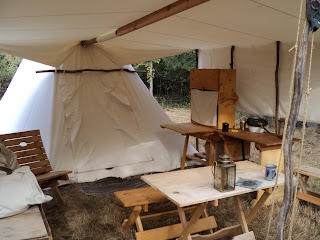 On HGTV they would call this a kitchen that needed up grading.  All the people doing displays camp here for the weekend in these tents, one even had a wood stove with a chimney. 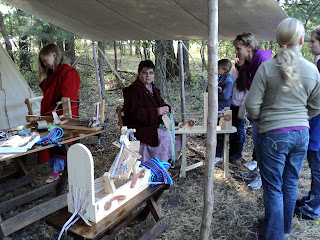 Weaving the belts that voyagers tied around their waists.  Thought this look really fun until we found out it takes about 10 to 14 hours to make a long one that would wrap around a large man twice.  Perhaps a headband that would only take a couple hours would be more our style. 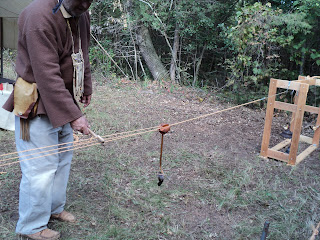 The rope making demo was the coolest.  They put three doubled lengths of twine on the wooden stand on the right weighted down so that it would stay tight as they twisted it and it got shorter.  When the twine got so twisted that it was ready to twist back on itself it would twist against each other and make the rope.  The wooden thing hanging and the little tool the guy is using was so that it didn't twist up on itself and get tangled.   It reminded me of the verse Ecclesiastes 4:12 Though one may be overpowered, two can defend themselves. A cord of three strands is not quickly broken. 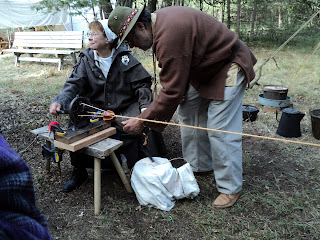 The machine that they used to make the rope was a 100 years old.  This lady was the happiest lady I can remember ever meeting. 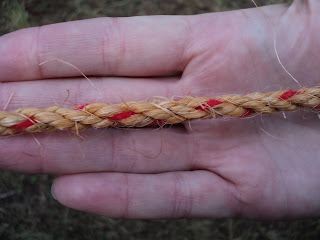 An interesting tidbit we learned about rope was that each farmer would put a different signature color in their rope so they would know who's was who's.

We spent the morning here enjoying a lot more demos and buying a few trinkets, Spark got a wooden yo-yo and Dancer a copper bracelet and some earrings.  It reminded us of Silver Dollar City only on a much, much smaller scale.

After we went to a homeschool store to pick up a few text books we needed before I would have time to order them and get them in the mail.  More expensive that mail ordering but I guess that is the cost of getting them quickly.  Of course, we also had to find a few geocaches so it was late afternoon before we headed home. 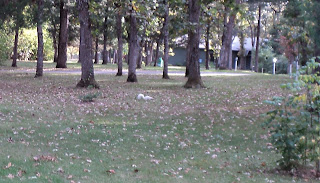 On the way we stopped at Grandma Pat's and where she lives they have albino squirrels.  The little white spot in the middle is one of them.  I have only seen these here and there are a lot of them so it must be some odd gene configuration just these squirrels are passing on to each other.
Posted by ~*~The Family~*~ at 4:10 PM

My knitty daughter says you can, indeed, card goat hair, just not the wiry hair. Cashmere comes from goat hair. You card the undercoat, mainly from the belly. And usually younger goats are used because they have softer hair. (I'm learning this just now with you. She is a wealth of information!)

Good to know! The babies are much, much softer than the big goats but we do have one older girl that is still soft.