Sunday At A Glance 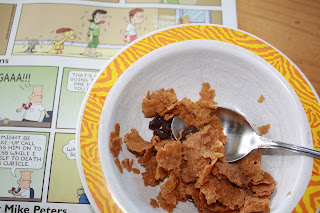 Dancer's breakfast.  The kids love Raisin Brand, it's the only kind they eat, going through at least a couple boxes a week.  Good thing Sam's has the two pack boxes.  Dancer puts milk on hers, drinks it off and then eats the cereal wet.  Spark drowns his and slurps while eating.  While Spark has bad manners, I think his would taste better. 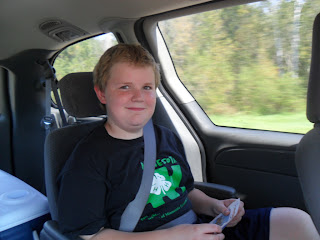 Dancer had a Jr. Leader 4-H meeting this afternoon so we were off in the car yet again.  I am starting to think we should have bought a much more expensive car and less expensive house since it seems we spend more time in the car.  The meeting was in a small town where most of the stores are closed on Sundays so Spark and I ended up browsing an unclaimed freight store and a farm supply store.  Both reminded me of permanent garage sales.  The farm supply store does have a regular store part but then the whole back is consignment stuff which means junk with a few antiques thrown in. 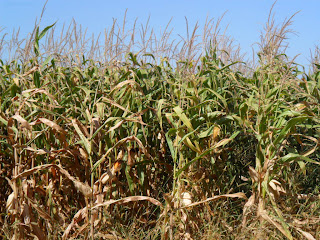 The corn is starting to turn brown.  That means soon the roads will be full of tractors and the sound of corn dryers humming all day and night will carry across the county. 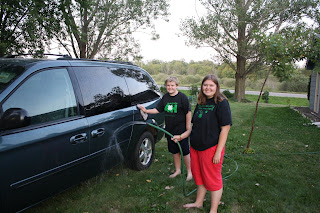 The car had so much mud on it it looked like we had been 4-wheeling, well I guess we have been on a lot of minimum maintenance roads lately.  Two kids with a hose and neither of them got wet, what are the odds of that? Corn for supper complements of Grandma Pat.  Have to savor every ear now since the season is all but over. 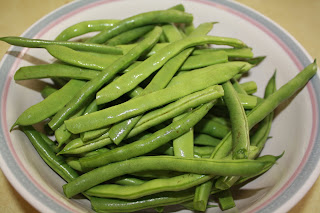 Green beans for supper, also from Grandma Pat.  Glad their garden did better than ours, which basically was a huge flop, and that they share with us. 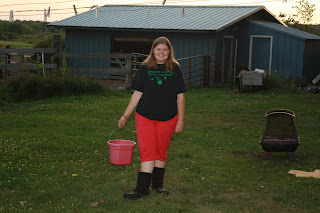 As always, there are chores to do.  The goats have been out grazing all day and as soon as they get in the barn they are baaing for hay.  They are such Sallys, they would starve in the wild. 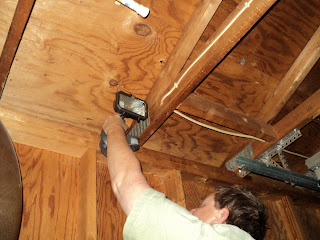 We are enjoying the new motion detector light Dad put up in the garage to turn on when we open the garage door.  Now with the days getting shorter we already have had a few times where we came home in the dark.  I think leaving the porch light on just screams that we aren't home so I don't like to have it on.  We also have to get out of the car and walk around outside of the garage to turn the inside garage light on, this fixes that problem as well. 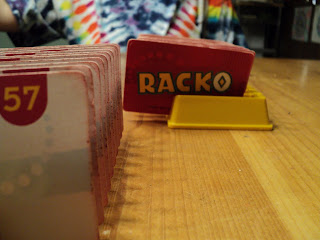 Dancer and I play a few games of Racko each and every day.  Love that game.  When I was a kid a friend had it and I always wanted the game for my own but never got it.  Now that I am the parent we have the game, we even have a back up game for when this one wears out which it is close to doing.  And no, having a 57 in the first spot is not good.

Every thing I have seen today is asking what you were doing when the attacks of 9/11 happened.  I had a house full of daycare kids, I had in home daycare from when Dancer was eight months old until she was seven.  We didn't watch t.v. or listen to the radio during the day because we were busy with playing and preschool type things.  In the afternoon Dad went to check his fantasy football stats and saw a blurb about it on the Internet.  It was several hours after it happened before we even heard it had happened.  I am surprised none of my daycare parents didn't call.  Of course, after we found out I was glued to the t.v. I remember it being such a time of unrest in the days and weeks that followed wondering if there were going to be anymore attacks.  Such a monumental event and our kids have no recollection of a pre 9/11 world, as far as they know tight security is how it has always been.
Posted by ~*~The Family~*~ at 11:18 PM

..."should have bought a more expensive car and less expensive house because that's where we spend all our time..." I hear that! Who was it that called homeschooling HOMEschooling? Seriously, people. :)

Because we were so close to the action, it was kind of difficult for me to avoid the happenings of 9/11. I do remember time and again thinking, "Thank God I homeschool. My kids are right here with me, my husband doesn't work in the city anymore."