We spent a lot of the week out geocaching and taking pictures of the all the ones we found and other interesting things.  Spark is making a book for 4-H about our adventures to enter under the geospatial category. 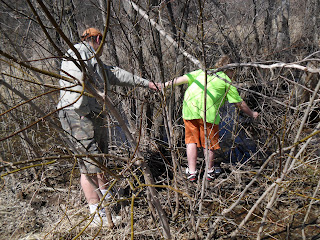 Spark is hanging over a flooded area at a boat landing.  Dad is hanging on to him so that he can lean farther out.  Didn't find this cache, think it was where the flooding was and we would have needed hip boots to find it.  We will come back later in the summer. 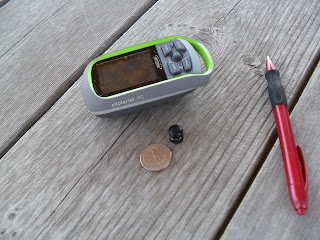 Dad found our first micro cache.  It is the little black button next to the quarter.  It is magnetic and was stuck way on the bottom of a picnic table among a couple of bolts. There is only a very slim piece of paper rolled up in it for the finder to sign their name.  We signed the very end not brave enough to unroll it because we didn't how we would ever get it back in that little container. 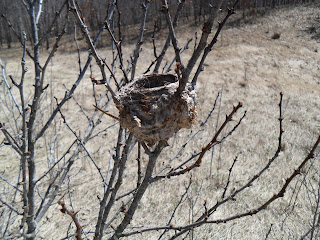 We were at a park that we have driven to before to see where it was but never hiked around it.  It was just beautiful the more we got into it.  There were lots of bird nests that aren't visible in the summer when the leaves are out. 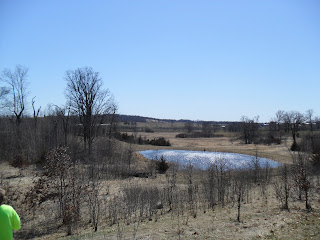 This park also had two ponds like this.  When we walked up to the first one it sounded like ducks when they talk to each other in their mumbling quacks.  When we got closer we could see that the water was alive, jumping with frogs, and what we thought were ducks were really thousands upon thousands of frogs.  I have never seen anything like it before. 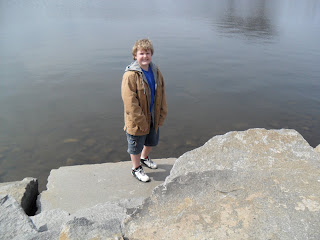 We went to this man made lake that is in the middle of the nearest big town to us.  The ice was already out on this lake but a lot of the lakes around still have a ways to go before they are thawed. 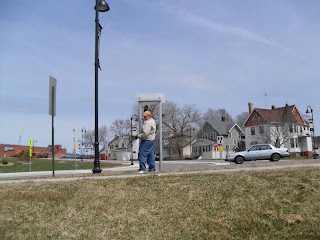 We got right down into almost the heart of downtown.  Thousands of people drive right by this cache every day and have no idea it is there. 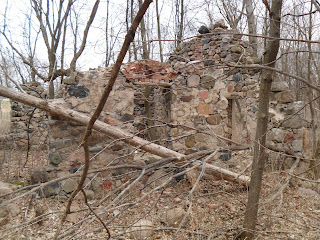 The absolute coolest place we went was this old stone building.  It is very close to a monastery and there is nothing else even close to it so it must have been built by monks.  We wondered what kind of things had happened there over the years. 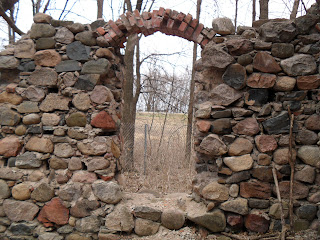 This is all that was left of the windows. Some of the windows didn't even have the arch left on the top anymore.  It made me think of Jesus as the keystone. 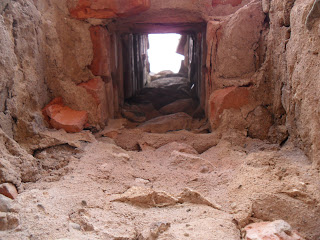 Dancer took this picture.  It is looking up one of the two chimneys that were on each end of the building. 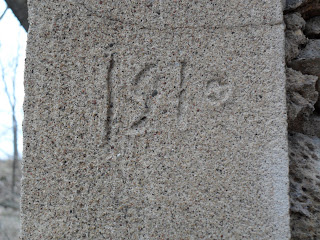 It looked like they tried to do some cementing over some of the stones.  We saw 1910 had been written in the cement on the door jam before it had dried.  1910 was probably the last remodel. 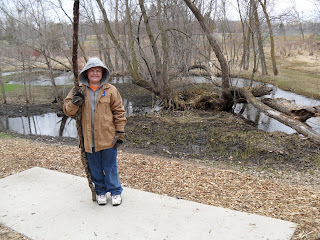 This is another park not to far from our house that we had never been to.  We were surprised by how big it was, we had no idea it went back so far into the woods.  It was very wet and muddy so we had to walk a long ways around to get to where we were going.  This part is a disc golf course. 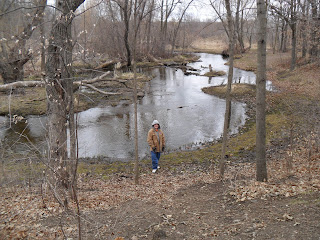 Spark down by the river.  The river snaked back and forth through the whole place.  The water current was running really fast so we threw sticks in and watched them float around the bends. 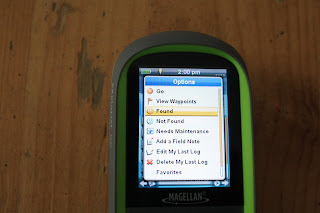