Millie was due to have these babies on Saturday.  We kept checking on her but no babies.  We thought having them on Sunday would be cool because it was Easter and my mom's birthday.  Nope.  Yesterday was the most beautiful day, warm and lots of sunshine.  She just layed sunning herself out in the corral chewing her cud.  We even left her out until dark in case she would go into labor it would be easier for her to have them outside.  Today is rainy and cold.  We went into town so the goats stayed in the barn, they hate the rain anyway and would have been crabby and miserable outside.  This morning when we left she was laying in the hay looking as non in labor as could be.  When we came home a couple hours later she had had two little boys.  They were still wet and the placenta was hanging out of her so she couldn't have had them much before we got home.  She is sneaky about giving birth, in four years we have never seen her have a baby.  As soon as we saw that they were boys the kids named them Niko and Phillip. 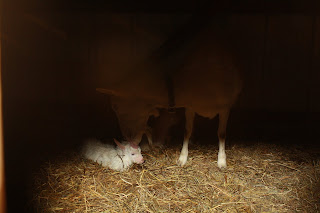 This is little Phillip getting his bath from his mom.  He is really tiny. 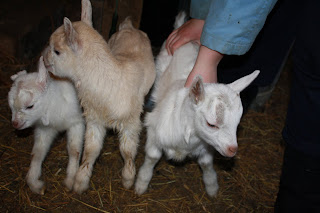 The other boy, Niko, is really big.  This picture shows Phillips on the left, Niko in the middle and Giles, who is three weeks old, on the right. 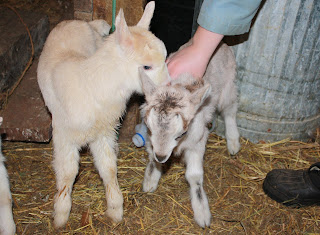 Niko is bigger than Lola who is also three weeks old.  Millie has never had two babies before, she has only had single births and they have all been huge.  This year, not only we were surprised that she had two but they were such different sizes.  Niko doesn't even act like a newborn, he stood right up and started walking with steady legs. 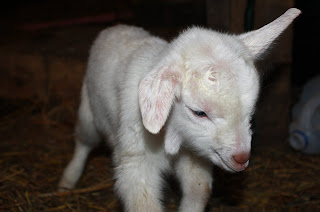 Phillip has one floppy ear.  Sometimes that happens with Saanens and people will tape them on a piece of cardboard to make them stand up straight.  Both were floppy for a couple of hours after he was born so we hope that the other one will follow suit without us intervening.
Posted by ~*~The Family~*~ at 9:55 PM