Dad worked the weekend and it was suppose to be cold and raining everyday.  Because of these two things I planned for us to get a good chunk of the 4-H projects the kids signed up for done this weekend.  It didn't rain but it was coldish.  We did get a lot done so I am calling the weekend a smashing success.


Friday Spark finished his Geospactial project.  He made a book about our geocaching adventures and added a list of things that are handy to have with when caching and page of geocaching vocabulary words.  Looking back that was maybe too big of a project for him, but since we aren't doing at the last minute it worked out okay.  He was able to start it, take a few weeks off from it, do a little more, take a break from it again, work on it again and so on.  He should be proud of it, he did a nice job, and I was happy to check it off the to do list.
Spark also did a food and nutrition project on vitamin D.  I was a little surprised that he picked that topic but I think Dancer might have had something to do with it.  It was hard to find much information on vitamin D that wasn't way to technical for the average person, much less a fourth grader, but we did find enough to make a poster. 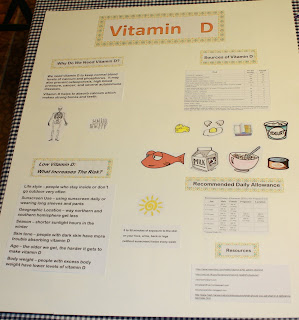 Dancer got three projects done. This one is under the category of Exploring Animals.  She chose to do a poster about how long it takes from a chicken to hatch from an egg until the chick that comes out of the egg is able to lay an egg.  It takes about five months if you are wondering.  She added in how the egg is made in the chicken and what happens most days inside the egg.  It takes 21 days for an egg to hatch so the development of the chick is rapid. 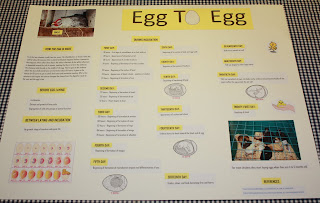 Her next one was Wildlife Biology where she did a poster about the nine different turtles that make Minnesota their home.  Wildlife Biology is one of her favorite categories.  She had all the research done for this one before hand and only had to find pictures of turtles and then put it together. 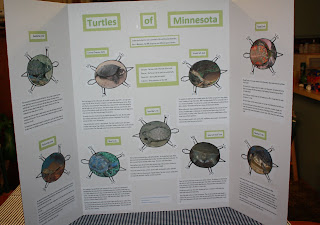 The last one she did was Fishing Sports, another favorite of hers.  She did this poster on how the catfish and bullhead are related to each other.  She add in some information on what bait they like and what the bag limit is.  It is pretty interesting, I didn't even know that the two fish had anything to do with each other. 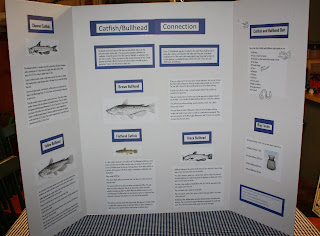 Dancer holds the position of historian in our club which makes her responsible for the club scrapbook.  We got two pages of the scrapbook done and got more pictures developed so it should be up to date soon.
We also had time to play ball a couple of times, watch the movie Tangled twice, go to church, take a walk, play several games of RACKO and Mario on the Wii, get some chores done around the house and run to the grocery store a couple of times (it's about 20 miles round trip to the nearest grocery store of any size so this makes the list of things we did because it isn't just a quick jog, we actually have to plan at least an hour to go).   The icing on the weekend was that kids were really focused and didn't even hardly argue with each other.
Posted by ~*~The Family~*~ at 12:00 AM