Our Own "Wizard Of Oz" Storm

Grandma Pat was over for the afternoon and Dad was out grilling brats for our supper.  It was really hot so the rest of us were inside basking in the air conditioning.  He hadn't been out there very long when he stuck his head in the door and said that we needed to cover up the new hay we had just had delivered because it was thundering off in the distance and might rain.  We checked the radar and there were storms but they were quite a ways off to the west.
We started stacking the hay, even Grandma was helping, and the wind was getting stronger and stronger and then it started to lightning.  We covered it the best we could, got the goats in as it was starting to down pour and ran for the house.  The temperature dropped 30 degrees in the 20 minutes we were out there.
In the next few minutes the weather got so much worst that we decided we better fill some water containers so we could at least brush our teeth and flush the toilets if the power went out.  Our next decision was to head to the basement.  It was so loud upstairs with things hitting the house, rain and hail coming down and the wind, which was about 70 mph according to the weather service.  We weren't in the basement more that a few minutes and it had all blown by.   We came back upstairs to see what we were facing in terms of damage.  There was an inch and half of rain in the rain gauge.  The rain was coming sideways so that wasn't accurate, there would have been much more. 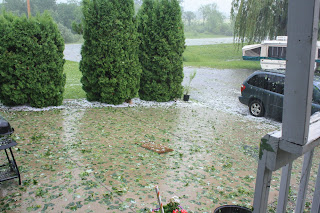 The hail shredded the leaves and plants.  The driveway, and everywhere else, is covered with leaf bits.  The white under the trees is hail that blew and collected into drifts. 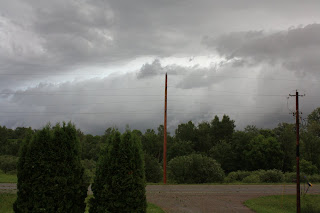 The clouds after the storm still don't look very friendly. 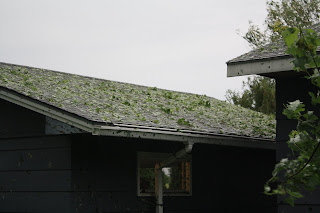 The garage roof covered with leaves and hail.  No shingle damage that we could see. 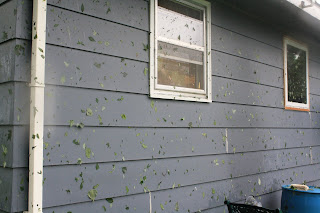 Leaves were plastered on the sides of the house. 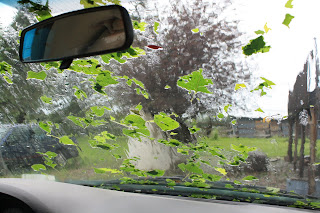 And the front window of the car, actually anything vertical was covered.  As far as we could tell last night the car didn't get any damage either but we will have to check it out closer. 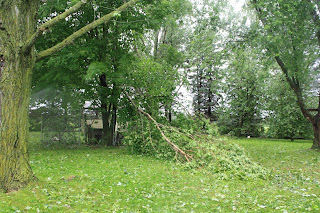 Lost some tree branches.  Dad and the kids cut them up this morning.  The goats are happily eating all the leaves off the branches to do their part in the clean up. 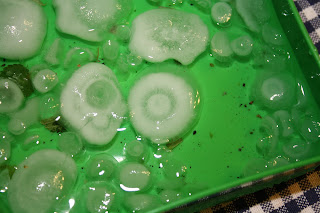 Spark went out and collected some hail stones.  They are pretty well melted here but you can still see the rings on them that show how they were tossed up in the atmosphere over and over. 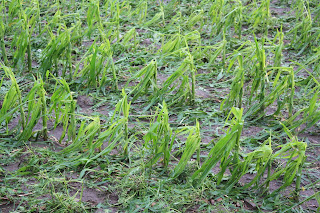 The corn field behind our house is pretty much a wash for this year.  That is what crop insurance is for.  Sadly, we lost most of our tomatoes, hostas and other flowers.  Spark had made a pallet garden for his vegetable gardening project and that isn't looking too good and Dancer had just bought two Bleeding Hearts earlier in the day that are now just stems sticking out of a pot.  We had our club 4-H planter in the driveway and Dad did manage to slip that in the garage before needing to dart into the house before the storm hit.  The tarp, that we worked so hard to get over the hay before the storm got here, blew off and a big portion of the bales got wet.  Hopefully they will dry some in the next few days of forecasted sunshine so they don't mold.  We will just feed the wet bales first so they won't be a total loss. 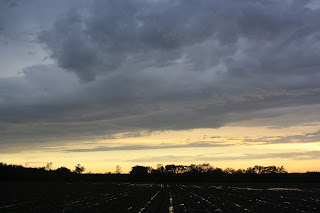 The night time sky, we could see nice weather was on it's way.  Today now is beautiful, the temps are in the 70's and the sun is shining.  It was nice to have the better temps since we spent the morning getting a good start on cleaning up the  yard.
Posted by ~*~The Family~*~ at 1:35 PM

Wow! I'm glad you're OK. I'm so sorry about the damage. Tell Dancer to plant the bleeding hearts anyway. They are used to dying back in the heat of summer and might come back next year.

Glad you are ok! We had a similar storm the same night...do you happen to live in MN or WI? It was crazy how the temp just kept going down so fast!