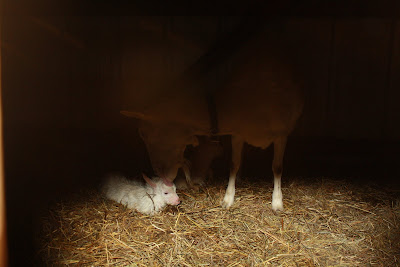 Yesterday was entry day at the fair.  The kids did well and I will post about it another day.  About half way home last night Spark started to cry that one of the goats had died.  He even came in and lay on his bed crying saying that he couldn't do chores.  The kids never complain about doing chores so we knew that he wasn't just trying to get out of them.  We always worry that something is going to happen when we are gone so as soon as we got home Dad ran out to check on them and everyone was fine.  He did all the chores and came in.  About half an hour later he saw that he left the light on in the barn.  He went out to turn it off and when he opened the barn door he heard this moaning sound coming from one of the pens.  He saw that Millie was laying upside down by the door.  When he opened the door she fell out and died, at least he thought she was alive before he opened the door.  She was extremely bloated so we have no idea what happened to her and how she would have gotten in that position as goats don't lay on their backs and she was just eating the same hay we always give them when he left them.

We have had her over five years, we bought her as a young kid, and we are all so sad about this.  We had plans with friends today and Dancer had a rehearsal at the fair for her Art-In show so we went on with them because we thought it would be good for the kids.  Every time I would think about her I would have to fight back the tears a little bit.  Her son, Niko, has been crying for her.  Every time I thought of him crying for her I would have to fight back the tears.  This is the part I hate about having animals.

How Spark felt that his was going to happen we don't know.  He doesn't know.

The picture above is Millie with her little goat Phillip that only lived three days, we thought he had a heart problem.  This is my favorite picture of her.  Now he has his mother back.
Posted by ~*~The Family~*~ at 12:20 AM

Oh no. Your poor family. I'm so sorry. As an animal lover, I completely understand. Your son sounds like a very sensitive young man. Reminds me of my son. When we have lost pets in the past, it hits him hard, but it also opens up beautiful deep conversations about the mystery of life and faith. I'm sending out lots of prayers and hugs for you all. Take care.