The second storm in a week came through our area.  I was out mowing lawn and by 8:00 p.m. it was dark out and lightning was starting in the west.  I put the lawn mower in the garage and the kids quick got the goats in and we headed in the house.  On the t.v. we could see on the radar a big storm and I saw that it had just gone over Grandpa Bob and Grandma Shirley's house.  I called them and they said that it was bad but they didn't have any damage.  When I called them the air was absolutely still.  We talked for a couple of minutes and I said I had to go because we needed to go in the basement.  It came that fast.  The actual wind only lasted about 15 minutes but it rained much longer.  Once the storm part was over and we just to the rain I thought, "good the electricity stayed on." The motion light on the barn was turning on and off, on and off, so I ran out there quick to turn it off.  On my way back in the lights went out.  Of course, Dad was at work as it seems he always is when these things hit.  We were some of the lucky ones in the area, our lights were only off for four and half hours, other went a whole day before their power was restored.  It was dark out when the storm finished so we couldn't see what damage we had until the next morning. 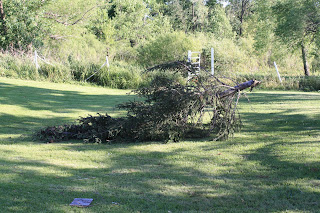 The top of this pine tree should be 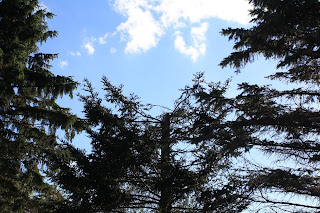 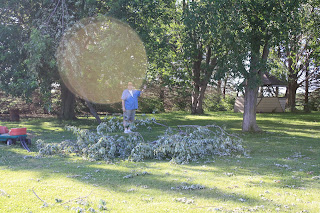 Dad has a big halo, crazy picture phenomenon or is he really that saintly?  Lots of branches down. 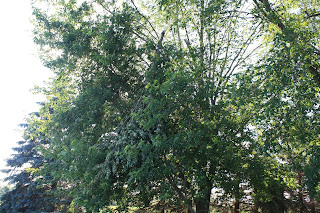 Lots of branches still hanging in the trees.  We are still pondering how we are going to get them down. 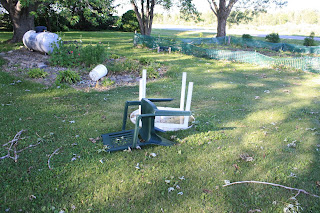 The kids had just put the picnic table and the chairs behind the house so that I could mow the backyard and we found them around the side of the house and 20 yards away from the house. 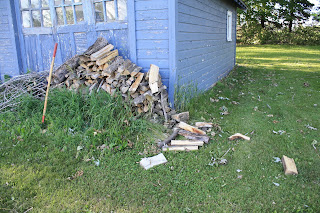 The winds were so strong they blew over a wood pile that was leaning against the shed. 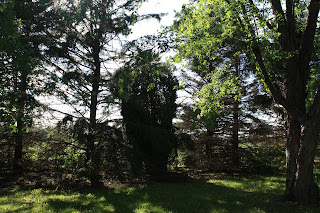 Another pine tree that the top blew off but is just hanging on the top of the tree.  Again, wondering what the best way to get that down will be. 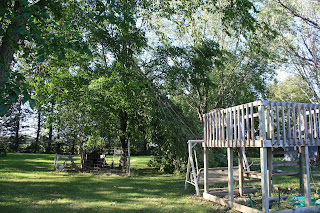 This tree lost a big branch in the storm last week and now an even bigger branch blew off.  Soon we won't have any trees left to go down in a storm. 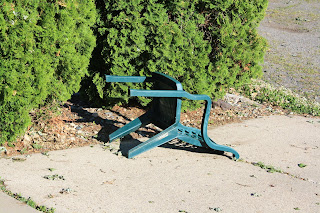 Another lawn chair blew from the house down the driveway and was stopped by a tree. 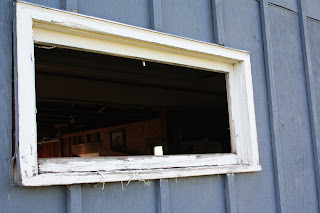 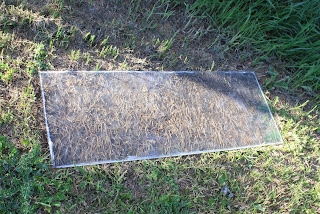 this pane of glass.  It fell from about five feet high and four feet out into the  yard and never broke, not even a chip.
We had a bunch more branches down, other things blown around the yard (like the charcoal starter that we keep under the grill was out by the road) and scads of sticks of various sizes to pick up.  We have our work cut out for us.  Around the area we didn't even have close to the worse damage.  Some places roofs blew off, trees fell on cars and buildings, basements flooded, and one friend was even driving in their car worried that they were going to be blown off the road. 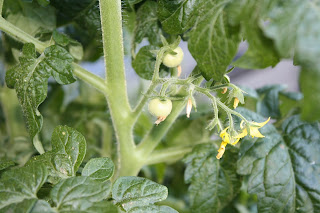 As we were coming in from the barn, before we knew about the big storm, I did mention to the kids that they should put the 4-H planter in the garage "just in case" and so it is still looking great.  We have a couple little tomatoes starting on it which we hope will be big in two weeks for the fair.
Posted by ~*~The Family~*~ at 7:06 PM