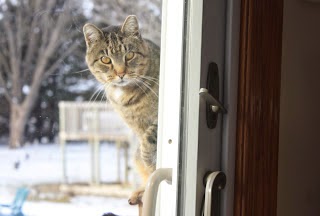 Dad and I were going for a walk this morning and there was a black thing on the road down by the field access.  I saw the stray black cat down there yesterday and thought, "Oh no, he must have gotten hit on the road."  When we got closer though we saw that it was our dear Vidalia.  Not sure what happened as she is scared of cars.  We figure her to be about 13 so perhaps she gotten confused and panicked when a car came and ran in the wrong direction or maybe she didn't hear it.  I was surprised as well that she even crossed the road because it seemed that she was always either at the deck door or the front door every time I would look or go out.

Vidalia came with our house.  She belonged to the daughter of the people who owned the house before us.  She got the cat when she lived here and when she moved to her own house took her with her.  Vidalia didn't care for the move so back she came to her original house.  When the owner decided to sell they asked if we would mind if they left her because of her moving history.  We even put her on the purchase agreement as a joke.  When the bank came out to do their inspection they came back with, "Everything looks fine except we could find what this Vidalia was."  We laughed at told them it was a cat.  Yes, we had a fun realtor.

She has always been an outside cat, only coming in when it was really, really cold outside.  Over her career as an outside cat she has caught hundreds if not thousands of mice, voles, chipmunks, rats, rabbits and other pesky critters in our yard.  In the last few years she has had trouble hunting and Kacheekers, our other outdoor cat and the only other cat she ever liked, would catch something, kill it half way and put it out for her to hunt and eat.  Although lately she had been having trouble chewing her catches.  He also spent hours grooming her and sleeping by her.  He is quite lost this evening.

We buried her down at the end of the corral by the swamp.  Good by Vidalia, you were a good hunter and we will miss you.
Posted by ~*~The Family~*~ at 10:32 PM 1 comment: