Learning about the layers of skin isn't too exciting so I thought it should at least be tasty. 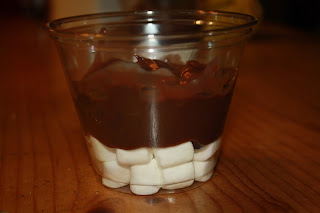 In a clear plastic solo cup we put in a layer of marshmallows for the hypodermis, which is the base layer of skin.  The hypodermis is a layer of fat who's job it is to act as insulation and cushion us from knocks and falls.

The second layer, the chocolate pudding, is the dermis.  This layer gives the organ its strength and elasticity with fibers of collagen and elastin.  A network of nerves and receptors pick up feelings such as touch, temperature and pain, relaying them to the brain.  This is also the layer where hair and glands (sweat and oil) are located. 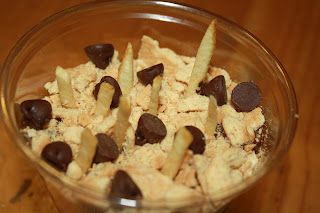 The last layer is the epidermis.  This is the outer layer that flakes off and makes about two pounds of dust a year per person.  To represent this we ground up graham crackers to show the flaking skin.  Flaking skin sounds yummy doesn't it?  The shoestring potatoes are hair.  These we stuck into the dermis layer and then out through the top of the epidermis layer.  To represent moles we used chocolate chips. 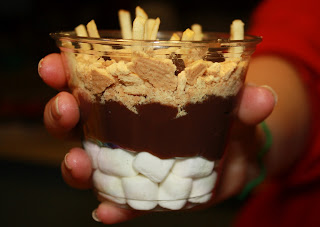 The side view of all the layers.  After making this we all sat down to a nice dish of skin and yes, it was tasty.
Posted by ~*~The Family~*~ at 9:15 PM