Our state has miles upon miles of bike trails that are built where there use to be railroad tracks.  Along side the trails there are often geocaches hidden every tenth to two tenths of a mile so we can combine two things we love to do, ride bike and geocache, at the same time.

Yesterday we had half a day free and so we made a couple hour trip up to one of these trails in northern part of the state.    We saw a few interesting things on our ride, one being the corn cob below. 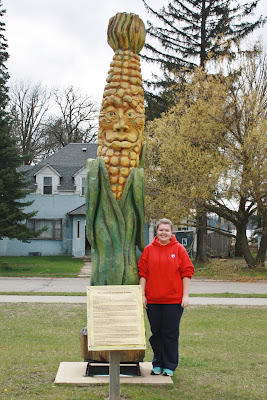 A tall, over ten feet tall, creepy corn cob.  The face on this is what we found to be so strange as it looks like old human like nose and  eyes staring off in the distance with a mouth that's not really smiling, but not really plain, more of a smirk. 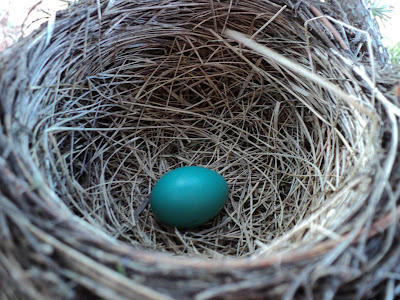 Dancer found an egg in a nest of the most beautiful blue.  I only carry our little point and shoot camera in my bike basket and she couldn't get a good angle of the egg by looking through the lens so she just held the camera over the nest and snapped the picture.  She was pleasantly surprised when we down loaded the pictures and it came out so well. 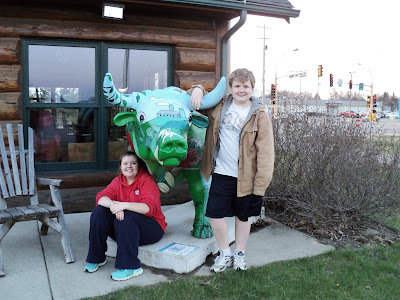 Paul Bunyan, the legendary lumberjack, is a big deal up there, legend has it that all the lakes were formed by his foot prints, and his image has been used to the max for tourism.  Babe the Big Blue Ox, his pet?, also gets plenty of time in the spot light.  We saw this Veggie Babe at a tourist information spot.  It was painted blue with plenty of shades of green veggies, a farm and a solar panel on her back.  I think this is a "mini" Babe as the original was suppose to be large enough to hang out with and keep up to Paul.

By the time we got to Babe it was getting late and them temperature was quickly dropping so we decided to load up the bikes and head for home.  Looking across the street though and we spied a Dairy Queen so we stopped to have Blizzards and french fries for supper - healthy I know, but we had just biked 15 miles and that is how we justified it.
Posted by ~*~The Family~*~ at 11:31 PM

I think anyone who can bike 15 miles deserves all the Dairy Queen they want!! The egg picture turned out beautiful - amazing how that sometimes without our "good" camera! And that corn cob guy...he's one freaky looking statue! Looks like you had a great trip!