Our second day of Sewing Camp.  We started out good, making steady progress.  I helped Dancer and one of her friends cut out their project, a messenger bag.  We had a break for breakfast and  a safety meeting on being careful with the machines and the rotary cutters.  Right after that I was helping Spark cut some quilt squares and he some how put his finger on the top the cutter while he was cutting and sliced his finger.  Oh, for the blood, and the crying, and people coming to see what had happened.  Thankfully they had a huge first aid kit there so was able to get it bandaged well.  He said that it was stinging and it did bleed for quite some time.  Not a good start to his morning but we were still doing okay.  I cut the rest of his squares and he did a great job sewing the pieces together. 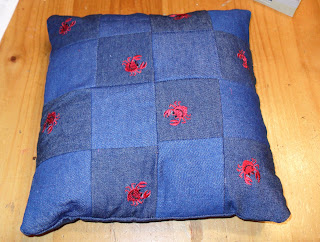 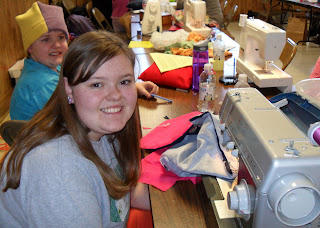 He was done about three hours before the end of camp and went on to make the hat he is wearing in this picture. 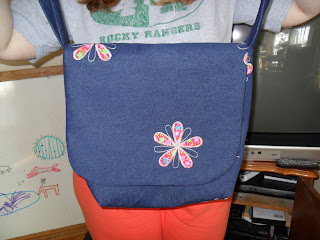 Dancer made this cuter than cute messenger bag. 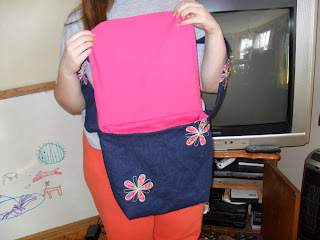 It is lined with bring pink fabric with an inside pocket. 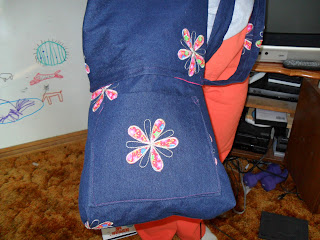 This is another pocket on the back. 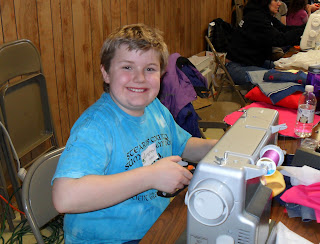 Spark sewing, he is really good at this.  I think I will see if he is interested in doing any other projects.
Later in the afternoon he started saying he didn't feel well and could he go sit in the car.  He has been coughing but they didn't sleep as long as usual with the friend over so I thought he was just tired and bored so didn't let him go out.  We got all done, packed up and went out to the car, even stopping to chat with our club's leader.  I put the car in gear and drive a little ways around the building and he starts to cough and throw up.  I don't do well with throw up, that is Dad's department.  I always did the poop and Dad did the throw up.  Our leader runs over and asks if everything is alright, her day job is a nurse thankfully, because she says I was making a bad face.  She has a bag with her and Spark doesn't get sick all over the car.  Poor kid, he said except for all the fun parts he wished he hadn't gone.  When we got home he lay down on the couch and slept for a few hours and now he asleep again so hopefully he is better for tomorrow.  We just can not get rid of this sickness at our house.  Hurry Spring.
Posted by ~*~The Family~*~ at 12:05 AM

They both did AWESOME!!

My youngest is now interested in sewing because she went to a Sew-A-Thon a few weeks back with 4H.

They made baby blankets to donate to a pro-Life organization around here.

Anyway, I am going to show her these neat projects.

She says she wants to be in beginning sewing next year!!