Some times the weekends are really busy and it's hard to make a meal that is quick, easy and ready  when ever you need it.  This past Sunday we were having some company over, but not for dinner, and they were coming at no particular time.   We were looking to make a quick meal while we tidied up the house and did our other week end routine items.  A quick look in the fridge provided a smoked sausage, and some peppers that were nearing the end of their useful life.  We always  have onions. 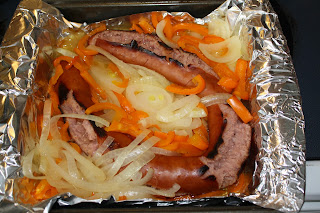 The sausage was put in a 9x13 pan first and placed in the oven at 350 degrees (who has time to preheat?).  The pan is lined with aluminium foil for easier clean up.  The sausage went in first, uncovered, because we like the sausage to have a little color and flavor (note the darkened and cracked areas).  after 1/2 an hour the sausage was turned over and sliced onion and peppers were added.  We also put in a small amount of butter so the vegetable wouldn't burn as they heated up.  The whole pan was then covered with tin foil (old habits) and put back in the oven for about another 30 minutes.

The dish was served with some fresh bread that was conveniently baked earlier in the day.  The food looked good on a serving plate as well.  No one is claiming this a super balanced meal, unless you are eating low carb, but it was tasty and allowed us to accomplish some things while it cooked on it's own.

I suppose a pack of frozen burritos would do the same thing.  Try to have foods on hand that can be made into a meal with a little creativity.  The sausage cost $2.05 and the vegetables around $0.50, it fed 4 people with left overs.
Posted by ~*~The Family~*~ at 11:50 PM