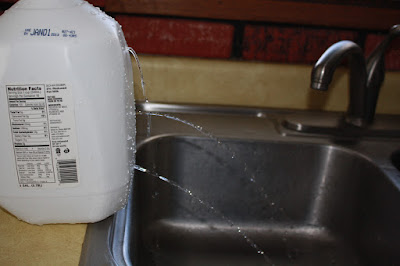 Water pressure - the stuff that makes your head hurt if you dive down too deep in the lake.

To show how water pressure effects the flow of water we took a milk carton and with a nail punched three vertical holes in the side of it.  Then we filled it to the top, set it on the side of the sink to see how the water would flow out of the three holes.   The top hole was unimpressive.  The second and third holes had the same distance in the water spray but the middle hole had a weaker flow shown by the fact that it was the same as the bottom hole.  If they had been the same the middle hole would have gone further because it was higher than the bottom hole.

The farther up the carton you go, the less weight is pressing down so the lower the water pressure.

The same works with air pressure.  The air that closest to the earth has the highest pressure.  Go up in the mountains and the air gets much thinner because it has less weight pressing on it making the air pressure lower.
Posted by ~*~The Family~*~ at 8:08 PM