A Break In Tradition

"The times they are a changin."  Yes, these lyrics by Bob Dylan could be appropriate for the world of government this morning but, when they were running through my head on an endless loop, I was thinking of my family, especially the kids.

Every New Year's Eve, since Dancer was about three, we have camped in the living room all night, watched movies after stuffing ourselves with crab legs and ooh and aahed at the ball dropping at midnight.  This year the times have changed.

It started out that we went to the store to get the crab.  The price per pound was much to rich for our blood so we offered to the kids the alternative of stopping to eat on the way home.  Dancer jumped at the chance because she isn't a fan of crab anyway.  So our big New Year's meal was Taco Johns.  It was expensive but not as expensive as the crab legs would have been. 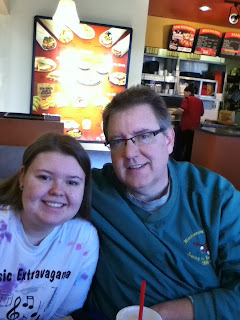 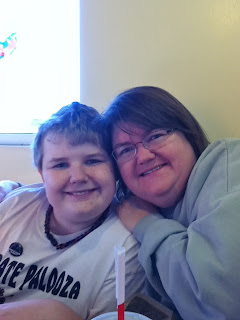 Dad worked this year and the kids didn't want to stay home just the three of us.  There was a party at church where they knew friends were waiting and they wanted to go.  We made a batch of Chex Mix, grabbed a bag of M&M's and were off to play games and break our tradition a little more.

I thought we would stay until about 9:00 or so and be home in time to watch Robin Hood, a New Year's must see, and the ball drop.  Nope, we were there having a good time until after midnight.

The car thermometer on the way home read -20.  It was so cold the garage door opener refused to open the garage door - can you blame it?  Spark offered to work on it but, I said it wasn't going to get any warmer in the garage, we will just park outside.  We still needed to bring some warm water out to all the animals in the barn, -20 is too cold for them to go with out water since the chores were done about 4:00 and I was sure the buckets had frozen probably by 6:00.  We filled up the jugs, redid the rabbit bottles, each of us said what were going to do when we got out there so we wouldn't waste time discussing it in the barn and dashed out the door.  Less than five minutes later we were back in the house with frozen eye balls and minimal frost bite.

Spark had set the DVR to record the ball dropping so we watched it an hour late and then snuggled in to watch Robin Hood.  Spark fell asleep about 10 minutes into the movie, so technically he did camp in the living room, and Dancer I made it about 45 minutes until we couldn't keep our eyes open anymore and crawled off to bed.

I have to admit I did enjoy this "new" New Year's celebration but it didn't really feel like we spent it together.

Also hindering my not wanting our traditions to change is that I am not a fan of New Year's.  While others see it as a chance to make changes, I view it as my old year, which contained so much blood, sweat and tears, being ripped out from under me and having to start all over with one tick of the clock.

I will always remember 2012 as the year we met that nice family who came to help us save our baby goats and turned into the loveliest of friends. :)

Same here, as one of your boys said, we are thankful your goats were sick.