This past weekend we had a min llama clinic to trim nails and give shots to a local llama herd.  The owner of the animals is in the hospital so our 4-H llama club was helping out. 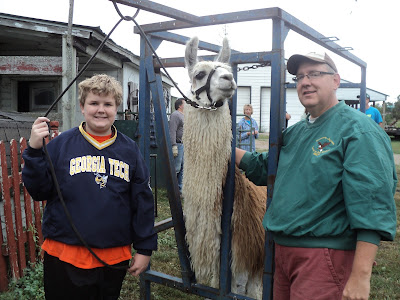 Spark and the Dad putting a llama in a chute to help hold it during it's care.  This is an older male with pretty cool fleece. The llamas needed their toes clipped and a subcutaneous shot of Ivomec wormer. 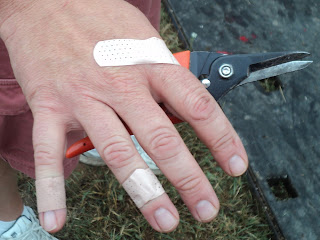 Dad was using a trimmer that kept popping open in his back pocket and when he reached for it he would cut his hand.  By the end of the project 30 percent of his digits are sporting Band-Aids.  Other members of the club thought this was funny since he is an RN.
After the work we had a great potluck to celebrate the end of the llama fair season.  The kids in our llama club did great job at all levels and really represented the cub well at the state fair.