Hours can be spent looking through all the enticing pins on Pinterest but, do all those projects really work?  Set out to find the answers, the hmmmschooling mom and ourselves did some Pinterest Busting.
The first one we tackled was, do Gummy Bears really expand in plain water and shrink in salt water?
This one was easy, all we needed was two bowls, water, salt and Gummy Bears who were willing to jump in. 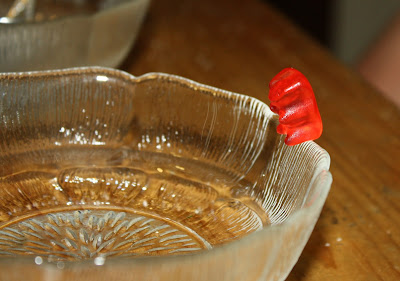 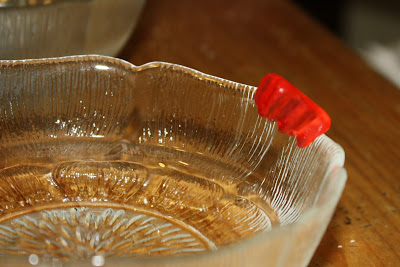 and he takes the plunge. 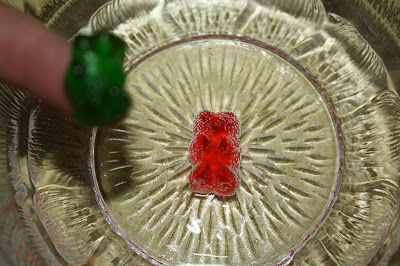 The Gummy bear in the plain water - he is full of bubbles and he did get a wee bit larger.  We were expecting gigantic so, while he did technically get bigger, we were disappointed.  All the other Gummy Bears were quickly devoured by the boys so we dug this one out of the trash who had fallen on the floor as our comparison.  Next time we will know to set one aside from hungry boys at the very start. 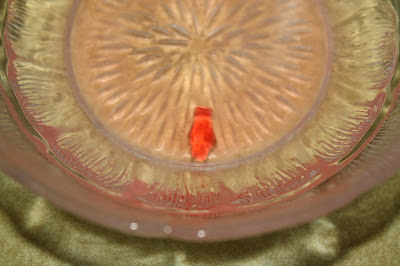 The salty bear.  He shrank, and he shrank much quicker that I had thought he would.  See the red water?  I think what really was happening was that he was dissolving.  By the time we went to bed he was gone.   The bear in the regular water was also shrinking by this time in a pool of red so he too started to dissolve, just took him much longer.
Did we bust the pin?  Yes, and no.  They did get bigger and smaller but, not in the way we had hoped.  Shrinking and dissolving are really two different things.
﻿
Posted by ~*~The Family~*~ at 11:49 AM

Water is the ultimate solvent, so I'm not surprised by the results. I wonder what would happen if you soaked them in other liquids? Maybe a corn syrup soak would do better for fattening them up. :o)

LOL - it fattens everything else up! For them it would be just more of the same.