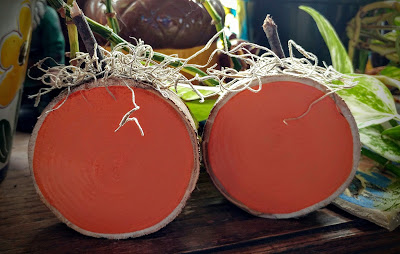 We were cleaning and burning up some brush the other day to get the yard ready for fall. When Dad was cutting the wood up I said to cut me some slices of a branch to make pumpkins.  Super simple, paint the slice orange leaving a little margin on the edge, then glue a stick and some Spanish moss on the top with hot glue.  Done! I used a semi gloss paint from Walmart that was about $1.50. I made seven and used about half the bottle of paint making them about 10 cents apiece.   The moss I had saved from some dried arrangement so no cost there.  If I hadn't had the moss I would have used dried grass or a bit of green fabric for an embellishment. 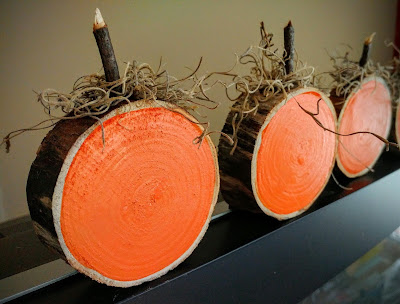 When the pumpkins were all lined up it made me think of the book I read to the kids at least a hundred times when they are little to teach ordinal numbers, "Five Little Pumpkins Sitting On a Gate."  Click  here to hear the song if you aren't familiar with it or just want to walk down memory lane.