What to do, what to do

It is Tuesday and we have two more days in Branson. It's great we have two more days left, but we are in a country music capital and we are not country music fans. This was made very clear to us when we watched the GAC show at Silver Dollar City. The singers would come out and sing a song and it seemed that every other person was clapping and singing along to songs we had never heard before. If a country music star knocked on my door I would probably think they were there to buy eggs unless it was Kenny Rogers. I do know who he is. Oh, or Randy Travis, I just love Randy Travis' singing voice and songs. 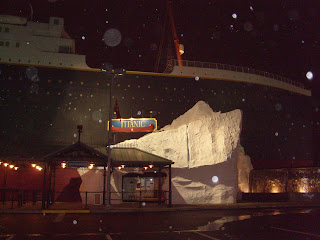 We decided to go to the Titanic museum. This picture is of the outside of the museum. It was raining, as it did just about everyday we were there, so that is the white dots on the photo. The tour is self paced and is suppose to take 90 minutes. It took us over two and a half hours. There is just so much to see and learn in there. When you first go in, through an iceberg, you are handed a passport. In the passport is a bio of one one of the people who were on the Titanic. As you go through the museum you can look for clues about if your person survived or not. Dancer and I survived and Dad and Spark perished.

Ride the Ducks was another activity we did. This is beyond fun. They drive you around town in this military DUKW vehicle that goes on land and in the water. The driver we had couldn't have been better at his job. He took us up this mountain and showed us all these military vehicles, drove down to the dam and fish hatchery and the main event is going out on Table Rock Lake. When we were out on the lake he let all the kids drive. So, so cool! We also got these duck bills to quack at other Duck vehicles that passed us on the road.
The last thing we did was the Dixie Stampede. The opening show in the carriage room was a juggler. He was so entertaining that he would have been almost worth the cost of the tickets. After the opening show you move into the arena area where you have dinner and they put on the show with the horses. The meal is a four course dinner which they serve you with no silverware. The food was fabulous. The only bad part about the whole thing is that the show is so good that it is hard to eat and watch at the same time!
There are a lot of other things to do there that are not country music related but we were out of time and money so it was time to make the long trek back home.
Posted by ~*~The Family~*~ at 9:32 PM