We started the night at a friends house eating pizza. The kids went downstairs to do whatever kids do and us adults pulled out the apple crisp and ice cream. That was our pre trick or treat! 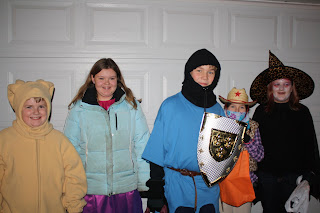 Here is the group of kids that trick or treated. There was a rabbit, Dancer had to be a snow princess since it was so cold and she wore her coat over her costume, a knight, a cow girl and a witch. I wore the pedometer to know how far we went and we walked about three miles by winding through their neighborhood and surrounding area. The kids would have gone even further because they ran up to the front doors for treats. We were out pandering about an hour and half.
. 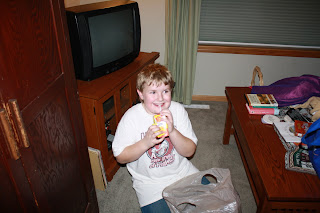 The kids got lots of good treats, the traditional candy and then cans of pop, lots of microwave popcorn, juice boxes, stickers, Valentine and Christmas candy (odd I know), Halloween drinking cups and one house gave out a bag of school supplies to each child with things such as full sized notebooks, packs of colored pencils, pens, highlighters, pencils, glue sticks and a bottle of water. I never got a notebook trick or treating but what a good idea. 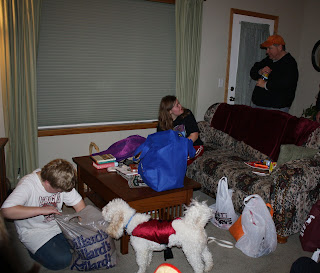 Dad telling Dancer how much he is going to enjoy eating all of her candy tonight after she goes to bed. 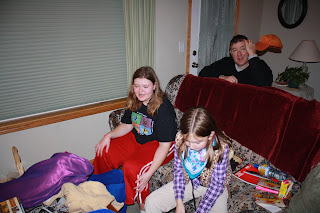 Dad, with his floating hat, is dismayed that she really isn't going to give him any candy!

After taking out all the extras from the candy, and enjoying some of their favorites, the kids each had three pounds to sell the dentist. I told them they got three dollars for the candy instead of twenty hours on the treadmill to wear all the calories off. They both thought this was an awesome deal.
Posted by ~*~The Family~*~ at 9:07 PM