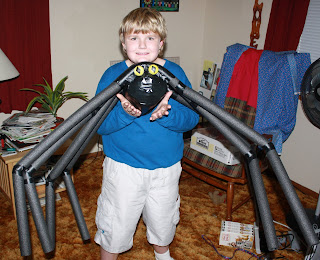 We all worked on this giant spider so he is a group effort. We rediscovered old Family Fun magazine in the basement from October 2005 and the directions for this spider was in it. We kinda followed their directions. He is made from a gallon milk jug, black foam pipe insulation tubes, a ping pong ball and lots of electrical tape.

First thing is to cut the spout off the milk jug.

Then cover it with the electrical tape until it is completely black.

Tape the tube onto the milk jug. Do whatever it takes to get those tubes to stay on the body. We resorted to hot glue and lots and lots of tape.

To make the legs bend whatever direction you want them to bend cut about a 1 inch notch from the side of the leg on the side you want it to bend to. Then keep in place with more tape.

For the eyes, cut a the ping pong ball in half using a utility knife. Be careful not to slip with the knife and jab it into your thumb thus having to stop the project to deal with your bleeding thumb. Color the now half balls yellow and put a black diamond in the center for an extra spooky effect. Hot glue these on the front of the spider.

It is hard to tell from our spider, because we took the picture from an angle where the eyes would show, but the legs do fan out on the sides and he looks more spider "normal". If he is propped up just so he will also stand. I am not sure what we are going to with him now but he was fun to make.
Posted by ~*~The Family~*~ at 11:00 PM

That is so cute! What a great idea!