"We sure had a lot of company today"

This is what Spark said tonight and he was right. This morning, before the butt crack of dawn, a couple men came over to put in a new bathroom window and sliding door in our dining room. 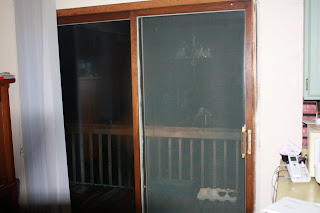 This is what the door old door looked like. It has never opened since we have lived here. It was so drafty that we caulked and taped the two sides of the door together a few winters ago because the blinds would blow back and forth when it was windy out. In the winter I am sure the heat just poured out of it. The glass so dirty between the panes that we never had a clear look into the backyard from that vantage point. But now all that has changed and we have a beautiful new sliding door! 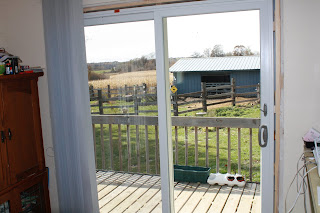 The other sliding door in the dining room had been replaced before we moved into the house. I said to the Dad, "How bad do you think that one was that they choose to replace it over this one?" I shutter to think.

Later in the morning a man came to buy some ducks. Before he could buy them we had to catch them. Last night we went out to try and catch them in the dark. The hope was that we could just walk up to them and pick them up like you can a chicken in the dark. We quickly learned that this isn't true for ducks, they are just as hard to catch in the dark as they are in the light. He brought a net with and we chased them into a building where we were able to "net" ten of them for him. We put on quite the show for the men putting in the new door and window!

This afternoon a family came to look at the goats we have for sale. They didn't buy any but it was fun to meet them and show off our "girls".

So yes, we had a lot of company for us. We can go weeks without anyone stopping by so to have so many in one day is probably a record.
Posted by ~*~The Family~*~ at 8:30 PM