Standing Up To Earthquakes 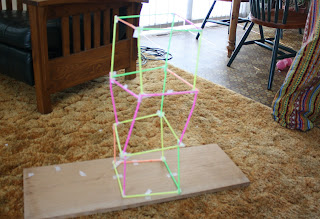 Spark tried to make a structure that would stand up to earthquakes.  He use plastic straws and tape.  His first structure was made with box-shaped cubes.  The straws represent the steel girders of a building.  The only straws we had were ones that bent on the top so it wasn't quite as strong as it could have been from the beginning but the theory was still the same. 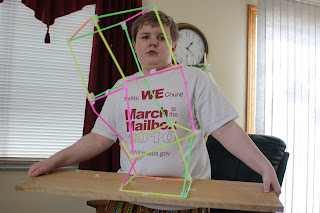 He taped it to the board to duplicate how a building would have a foundation and then started the earthquake.  Sparks earthquakes would have been about a 100 on the Richter scale.  An earthquake the size of his would have knocked the earth off it's orbit. 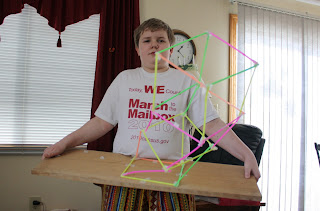 The building is swaying, bending and twisting all over.  Okay, so this shows it's not the best way to build a building with just the cube design. 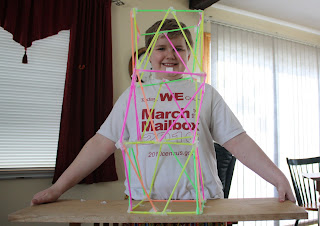 Add some reinforcement beans to each of the cubes. 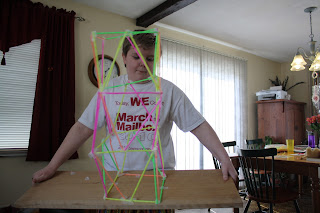 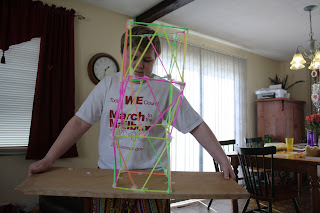 That building wasn't going anywhere, even when he tipped it forward.  Then in true boy fashion he set the board down and smashed the building flat to the floor.  Why is it that boys always want to smash stuff?
Posted by ~*~The Family~*~ at 9:55 PM

We did that with bridges a few weeks back.

My boys smashed it all up when they were done also.

Boys like destruction and they are so good at it!!

This sounds like something my son would like to do also. I will have to keep it in mind for when he needs an idea of something to do.