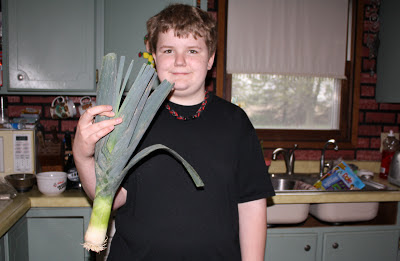 Lots of recipes I read have leeks in the ingredient list.  I have always wondered what all the fuss was about this vegetable and have substituted onion.  Finally, my curiosity got the best of me and I ordered some leeks.  They are impressive, about 18 inches in length.  However, all that green top part is simply for show, (there is probably some use for it but I haven't run across it yet) it is cut off and discarded. 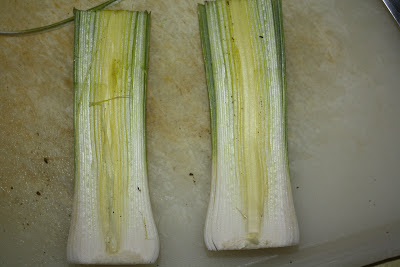 What was left was about six inches of useable leek.  Cut it in half. 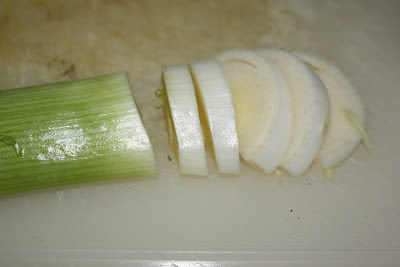 Cut each half in little slivers. 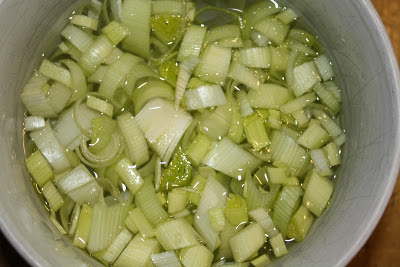 Crumble all the slivers in a bowl of water and give it a good splash to remove the dirt that is between the layers.  Supposedly they are a very dirty vegetable, however, we found no dirt in the bottom of our bowl.  Could be ours was an exception to the rule so to avoid a broken tooth in the future I will still clean all leeks.
Now, was the leek all it was cracked up to be.  We didn't think so.  Raw it was strong, much like a strong onion or an intense chive but, I would think as with onions and chives it varies per leek.  Cooked we couldn't tell the difference between it and an onion.  From now on I think we will continue to subsitute the plain, old onion.
The only difference in leeks and onions is that leeks have more calcuim, except in green onions, although each only have trace amounts.  Leeks have 10 times the amount of iron 2.1 g per 100 g compared the onion.  Leeks are also significantly higher in vitamin C and they contain vitamin A whereas onions do not.  However, if you are eating plenty of other fruits and vegetables daily this shouldn't make or break you RDA of these vitatmins or minerals.
Posted by ~*~The Family~*~ at 12:16 PM