Some amphibians, tree frogs for example, spend the winters hiding under matted grass or fallen leaves.  they have little protection from freezing temperatures.  Normally, when an animals cells freeze, the animal's cells and tissues are destroyed by jagged pieces of frozen water in the cells.  How do these frogs avoid a similar fate?  The frogs make their own antifreeze for their cells.  They put extra glucose, a sugar the body uses for energy, into the cells fluid.  Look below for a demonstration that shows how this works. 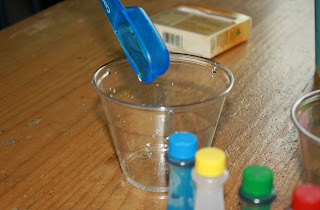 Three cups are used.  One has just water in it.  The next has one Tbsp. of water and one Tbsp. of corn syrup mixed together.  The last cup is just corn syrup.  Frog blood isn't blue, but the color makes the pictures easier to see. 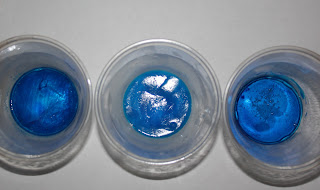 The picture above is after an hour in the freezer.  The first two cups are frozen.  The corn Syrup is liquid but very thick. 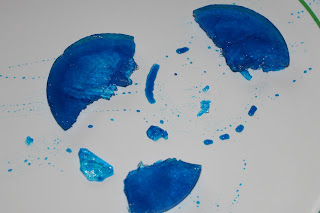 The frozen water has sharp edges and long pointy crystals which would tear and destroy the frog's cells. 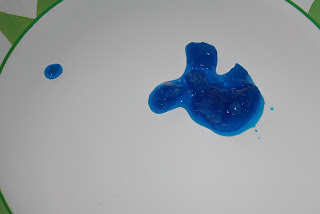 The mixture of corn syrup made a mushy blue slush without sharp edged to damage the frogs cells.  The cells remain viable until the frog breaks dormancy in the spring. The corn syrup didn't freeze, but a frog couldn't replace all of their body fluid with glucose and still be alive, they would sort of be embalmed.
Posted by ~*~The Family~*~ at 10:50 AM