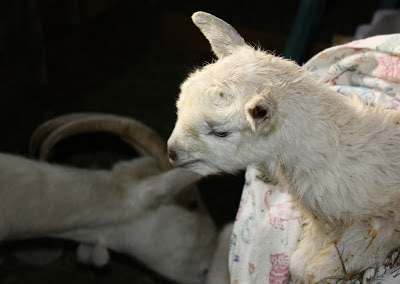 It was a boy year here.  Every kid was a boy, what are the odds of that? 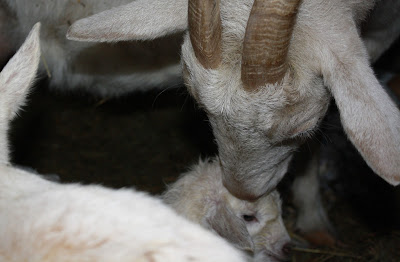 Desdemona was the last to deliver - two more boys! 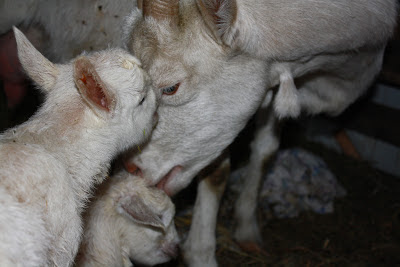 She had a hard labor with contractions all Friday afternoon. 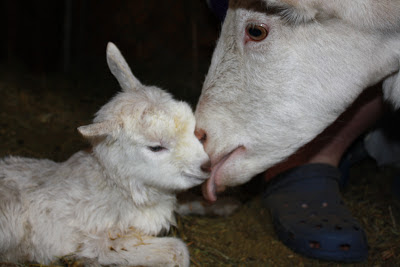 When their water breaks we usually give them half an hour before we give them assistance but, at the half hour mark we saw no sign of a kid.  When her water broke it was yellow, the tell tale sign that the kid had pooed, not a good thing.  ﻿ 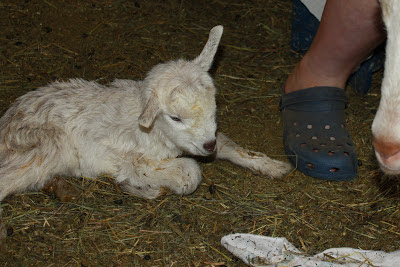 Assuming the kid was dead as soon as we saw a little hoof out far enough we grabbed on and started pulling.  When a kid is still born they often don't come out how they should so our goal now was to keep her uterus in and get the kid out.  While we were waiting for her contractions to help with the process Dad said that the legs felt warm which could be just from being in the mom but they had been out for quite a while.  Pretty soon we could see the mouth and its tongue was sticking out.  We have learned over the years that this isn't a good sign either.  When I touched the tongue it went back in it's mouth and came out again!  Finally, the head came out and then the rest just slides out.  To our delight it was alive and very good condition.  We quick wiped out the mouth and nose so it wouldn't inhale any poo into its lungs and he was good to go.  Next baby we saw a little spot of a hoof and by the time we got back to her it shot out in one push.  They should all be so easy!   ﻿ 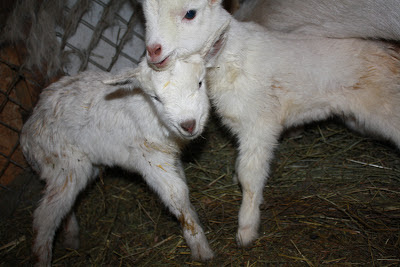 Introducing Phil and Si.  They were born too late to go to the fair so we will let them grow up and then find a new home for them.  They are so cute I can't imagine it will be too hard.
Posted by ~*~The Family~*~ at 11:35 PM