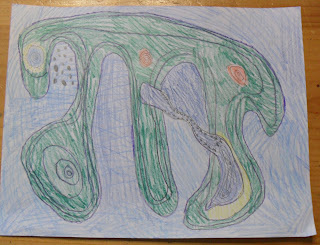 Dancer is studying physical science right know.  The first lesson talked about what a topographic map is and how it shows the terrain changes even though it is two dimensional.  A topographic map has contour lines, the progression from one line to the next represents a change in terrain height.  On Dancer's map if the distance between lines was 10 meters the volcano on the lower left would be over 60 meters, or over 200 feet higher than the water.  Other features are shown with colors or symbols; the yellow beach around the lagoon lower right and the marshy estuary between the middle and right points of land.  Some parts of the island have nice easy slopes where many games or sports could be played, other areas are too steep to be of much use.

Dancer, who loves fishing, has taken notice that lake depth maps work the same way.  Fishing is a big deal here so there are lake maps available for all the lakes in our state.

The island map shown above is here first one, Paradise Island (the name was part of the assignment).  She has enjoyed making these maps so much she has made over a dozen detailed maps of various islands and land masses, each one more detailed than the last.
Posted by ~*~The Family~*~ at 9:55 PM