How To Save Money On Cat Food

We go through a lot of cat food, a lot like 18 pounds every couple weeks for just two cats that also have their fill of goat milk and eat a couple rodents every day.  Once in a while we will see a stray cat helping themselves to the cat food but it was getting ridiculous how much food was getting eaten every night.  We were starting to think that perhaps they were throwing cat parties at night and supplying the refreshments was their job.

Two nights ago the kids and I were sitting watching t.v. and we heard a clunk out on the porch so Dancer went to check it out.  She turned on the light, opened the door and there wasn't anything out there but she thought saw a long striped tail waddling around the corner of the arborvitae.   Well, thinking you saw a striped tail is good enough for me.

I ran out and got the live trap while Dancer mixed up a dish of raw egg and dog food, we were out of cat food so we had resorted to feeding dog food until we could get into town to buy more.  Then we waited. 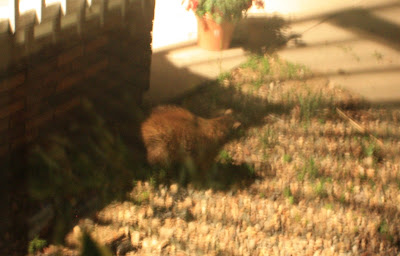 It wasn't too long before Ricky, who's dinner had been interrupted by Dancer opening the door, was back for his second course.  There was food spilled in the rocks and he combed through them and while he was eating those pieces he would look right at us.  Dancer even knocked on the window once and he just kept munching away. 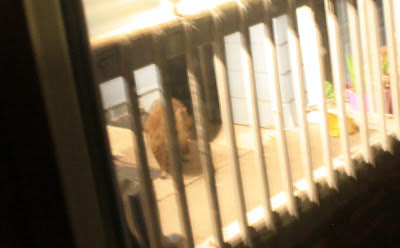 Then he was back up on the porch snooping around.  We use to keep the food up on the railing so that the chickens couldn't get at it and he tried climbing up on the rail which makes me think we have been feeding him a long time as the chickens have been in their coop for a few weeks.  He didn't make it up on the rail though,  he grabbed onto the spindles, got about 10 inches off the ground and slid back down.  I think his two cup a day cat food habit has made him too fat to get up there.  As for the live trap, he never even glanced at it. 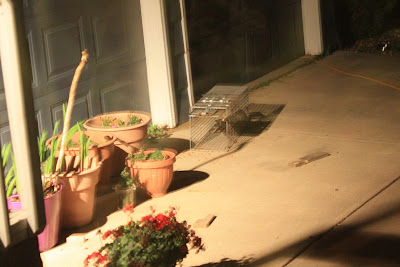 With a little planning we were poised and ready for him last night.  This time we put in the trap a can of sardines in Louisiana hot sauce, hope he likes Cajun cuisine, and cat food sprinkled around the entrance.  I even set up the camera on the tripod so I could get steady pictures of him.  We locked the cats up in the garage so they wouldn't be in the way and we waited.  And waited.  And waited.  Midnight, no raccoon, 1:00 a.m., no raccoon, 1:30 a.m., still no raccoon.  Did he change his route that he is so late?  The cat dish is empty every morning so we know he always comes.  We trudged off to bed feeling defeated. 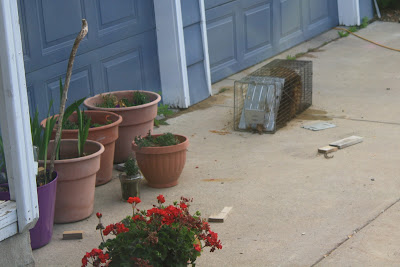 This morning first thing we looked out and saw that he had been here for dinner. 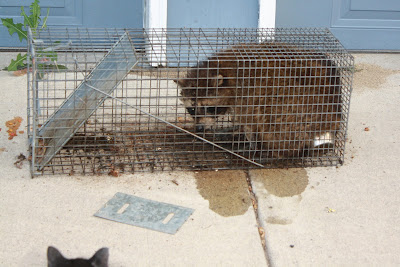 "I've been bamboozled!"  he is telling Kacheekers, who was highly interested in him.  He is big, our live trap is a good three feet long and he is taking up half of it huddled in the back, but then he is well fed.

What to do with him now as he tore the handle off the trap?  We'll make that Dad's department. 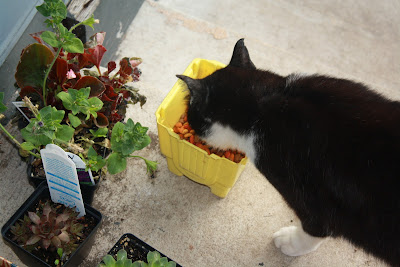