One Home, One To Go

Dad and I went into town early to pick up Spark from camp so that we could go out to lunch.  We also went to lunch when we dropped him off.  It is rare for us to eat out at all, and then twice in one week but, it seems really cheap for two people to eat out compared to four.

Of course,since we were early, he bus was late.  Spark got off the bus and just didn't look himself.  I asked him if anything was wrong and he assured me he was just tired.  Which was true, we walked in the door and he headed straight for his Legos for a few minutes, had a bowl of cereal, got his comforter, sprawled out on the couch to "watch t.v." and fell promptly asleep.  I thought he might sleep all night but he got up after a three hour nap and still looks like it won't be a problem for him to sleep tonight. 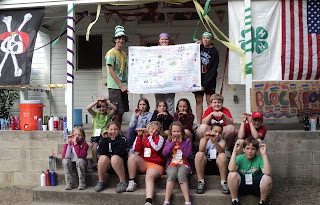 He took over a hundred pictures at camp and this was one of three that had him in it.  This was his color group with their flag.  Dancer is the one in the middle behind the flag and Spark is on the top row on the right.

He learned a few new songs at camp.  One was a new version of Mary Had A Little Lamb.  Goes like this:

Mary had a little lamb
Her father shot it dead
Now she takes her lamb to school
Between two slices of bread.

Fun.  I am sure when he gets more sleep we will hear more tales and songs of camp.