This, That, and the Other Thing

Dancer got her driver's permit on Monday.  She is doing quite well driving but I do have the urge to grab the wheel once in a while.  I am able to hold back........most of the time.  I thought it would be weird to be in the passenger seat with her driving but it isn't.  Now that she has her permit, she wants to drive everywhere we go.  Her wanting to drive is a surprise because we had to push her to go and take the written test.  A teen has to have the learners permit for six months before they can get an actual license and I have heard plenty kids that wish they had gotten their permits earlier because when their 16th birthday rolled around they hadn't had their permits long enough.  The mark to six months to her 16th birthday is July 14th so we finally just said, we are taking you in and if you pass, great, if not you have a couple more weeks to study before we take you in again.  Thankfully she passed on her first try. 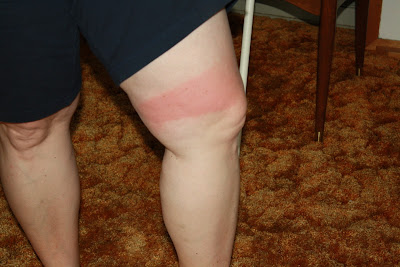 If you hold a baby bunny long enough it will pee on you, for being so little they sure do go a lot.  I knew this because it happened to Grandma Pat once, tonight I was reminded of the fact. 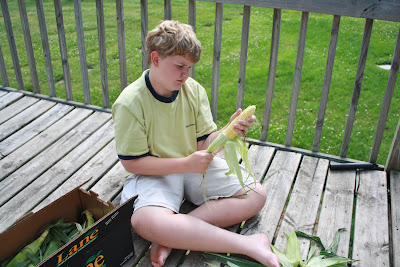 We had our first dinner of sweet corn for the season. 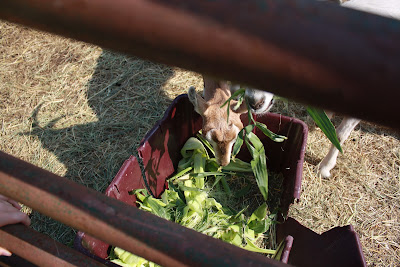 The goats had their first dinner of corn husks for the season.

If you drag the garbage cans all the way back up to the garage, it is best to realize that they are still heavy and full while out on the road.   The garbage man was late today, guess how I know that.

When Grandma Shirley and Grandpa Bob say they will be here at 12:30, be ready for them at 11:00 because that is when they showed up.  We were ready because this happen every time, that or they are a couple hours late.  Why my dad and I have trouble communicating about time is beyond me, we don't have trouble with any other topic. 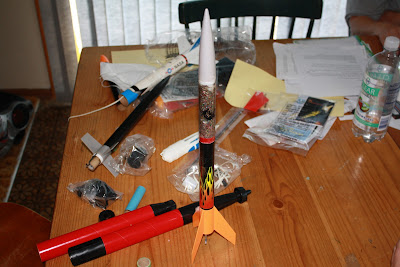 It has been 4-H project central around here.  We have been working feverishly on projects over the last week and are getting the list whittled down.  It is still three and a half weeks until the fair but to me it feels like crunch time.  A good thing this year is that the kids have had projects in aerospace for so many years that we now have enough spare parts to make rockets without having the buy anything.  Rockets tend to be expensive.

We have spent a lot of time sitting out in the yard under the trees because it is cooler than in the house with the airconditioning on.  Unless we sit in the basement where it is so cold a blanket is almost necessary.  Our cat, Vidalia, has been panting we think from the heat.  When Dad looked up cat panting on the internet he found the symptoms constatute an emergency and the cat should be taken to the vet immediately where it needs a complete blood panel, chest x-ray and EKG because they probably have heart disease.  We love you Vidalia but, that is just so not going to happen.  Tonight she was on the steps eating and looking perfectly fine.  She is at least nine so it is possible she does have heart disease.

We have a rule, or strong suggestion, that you wear shoes outside at all times and never, ever, ever, ever go barefoot.  Two reasons for this: chicken poo and thistles.  It does not put you in a good mood if you decide to break this rule, step on a thistle, get a thorn in your foot and have your sister give you a "why do you think you are suppose to wear shoes?"  Ahhh, older siblings, I have one too Spark.

Dancer took a swing/salsa class last night that another homeschooler is teaching.  She came out and gleefully said it was so great to be dancing again.  I thought so too since it was $3.00 for two hours instead of $10.00 per hour, there are no costumes, recitals, competitions, early mornings or, best of all, drama.  If you have ever seen that t.v. show "Dance Moms" it really is like that.  They may have stepped it up a little for the show but not much.  Dance is a cut throat sport where the girls and moms eat each other.

Lastly, when it is this humid the clothes on the line never get fully dry.  Dissappointing since we had three loads out there and three loads of even partially dry clothes do not fit in our dryer all at once.  It also means hauling them all back downstairs and up again.
Posted by ~*~The Family~*~ at 11:35 PM

Dance moms actually do eat each other for breakfast lunch and dinner. You are NOT exaggerating. :)

I love your stripe. I have something similar in a moon shape on my upper chest. I can't blame mine on my tank being shorter when I sat down. Mine was just pure stupidity and refusal to put on sunblock before I was a nice cherry red. We had a ton of fun though, so thanks! Of course we hardly got any time together...;)

We just have to find a way to make these odd sunburn shapes fashionable. Look out Paris runways!

No matter how much sunscreen and how high the SPF, I always manage to burn. Irritating! That's why I almost never wear shorts!

Ah, the good old days of dance. It sort of gets better in college. Sort of.