Our week has been jammed pack full of activities, appointments, preparations and not much school. 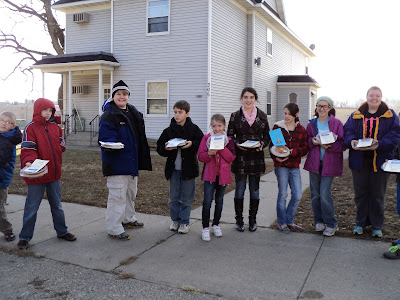 On Tuesday our homeschool co-op made and delivered Thanksgiving baskets and pies.  This is a fun project we have enjoyed the last two years.

Wednesday was spent baking for our Thanksgiving diner.  We made an Amish Sugar pie.  The jury is out on if it was good or not.  I think it was one of those things you either love it or you don't.  As the name says it is sugar, lots and lots of it makes my teeth hurt to eat this sugar with a little lemon and three eggs thrown in.  Dad made rolls and he is a very picky baker, you could call him a baking snob in fact.  He made several batches before he had ones that he thought were worthy for a Thanksgiving diner.  The kids and I had no problems enjoying the ones that he shunned.

The kids also had dentist appointments on Wednesday.  Dancer had her first cavity.  She is pretty upset about it which I wasn't expecting.  She has been through having teeth pulled and braces so this should really be a walk in the park, it is just a little one.  Once she has it done I am sure she will see that it isn't such a big deal.  I had a mouthful of fillings by the time I was her age, although that fact isn't making her feel better.  She will understand now though why Dad and I don't enjoying going to the dentist, something the kids have never understood before.

Wednesday night Dancer was invited to a youth group Thanksgiving dinner and game night.  They played "Plunger Ball" - yes it is a game played with a toilet plunger.  When we went into town to pick her up we stopped for a late night snack at McDonalds so I could down load the book The Homeschooling Highway: How To Navigate Your Way Without Getting Carsick  on the Kindle.  It is wonderfully written by a famish kind of homeschool mom  we happen to have the good fortune of being friends with. We don't have wifi at our house so any time we want something it means a trip to either a restaurant or the local laundromat. 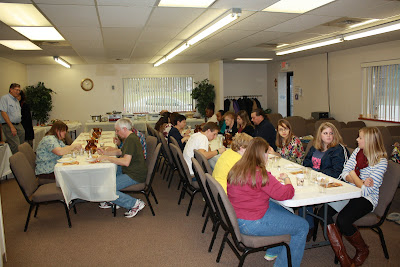 Thursday we celebrated the day at church.  Our church is right across the road from a college and we extended an invitation to the international students to join us for dinner.  Only two came, one from the Bahamas and one from Ethiopia, we had a fun time getting to know them and playing games.  During diner it started to snow and just kept on snowing and snowing and snowing.

By the time we were ready to leave the roads were slick and we had to creep our way home.  There were a lot of accidents which means that Dad, who was hoping to get put on call a good portion of the holiday weekend, is working since many were very serious and people are hospitalized.  Dad always says that people misunderstand that when people hear of a crash that reports there were no deaths they assume everyone is alright.  The reality, the part he sees, is that many are hospitalized for months and months, endure many surgeries, intense pain and have life long problems that make their former lives a memory.

Friday we were invited to dinner at a friends.  Only Dancer and I were able to go as Dad was going to work and Spark wasn't feeling well so he stayed home.  They both really missed out as the food was plentiful and delicious.  After dinner we played the game "What's Yours Like?"  We laughed so hard that my cheeks hurt by the time we left.  Might have to look for that game the next time we are shopping.
﻿
That brings us to today, Saturday afternoon.  This morning we brought our two new kittens to the vet for check ups and their first shots.  This first appointment was $248 - so much for free kittens.  We thought they would be outside cats but I am rethinking that plan since they are going to be expensive little creatures by the time we finish up their shots and neutering.  I use to think that a cat at the Humane Society for $60 was out of line but it looks like a bargain now.

We have lots of pictures from the week but Blogger is not cooperating.  When it starts to work I will add some in.
Posted by ~*~The Family~*~ at 3:51 PM

At least they're very cute, expensive kittens! This is one of the reasons I decided I would rather adopt older cats now. That and I don't have the energy for the trouble kittens can get into. We had one that got stuck behind our cabinets. My husband seriously considered taking the counter apart before we realized he had squeezed into and behind an open drawer!

Have fun with them and take lots of photos. They grow so fast!