Dancer has been wanting a parrot.   Well, that is nice honey but we are not getting a parrot.  Then, lo and behold, we were asked if we wanted a parrot.   The people we got him from had him for six years and think he is not too much older than that, probably under ten years old.  Dancer knows that he will most likely live another 30 years and says she is willing to haul him around until she is about my age.  We will see, I think he will probably be here until she is married and living in her own permanent home.
So here he is, he is living in Spark's room since that is where we have space for him right now.  Maybe after Christmas we will move him out to the living room.  He will be more used to us by then too.
Bert is quite the bird already.  He whistles, says pretty Bert, good night, makes kiss noises, screeches, squawks, coughs if someone in the room coughs, dances, bangs his little ankle tag on his perch when he wants attention and likes to have his head scratched. 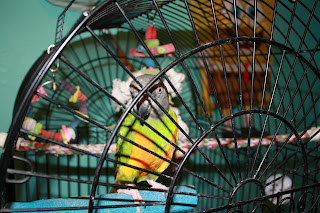 Bert is a Senegal parrot the size of 20 oz. pop bottle. 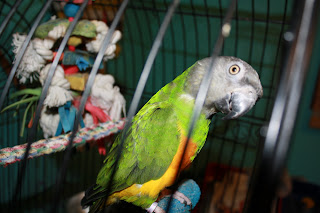 It is thought that he is boy, but that is purely speculation.  He could be a Roberta instead of Bert. 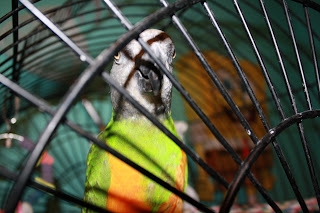 His cage is about four feet tall and at least two feet square, his accommodations are the Hilton of the bird world. 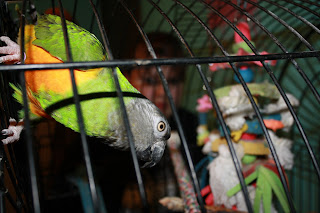 ﻿
It seems he has every bird toy ever made that we are suppose to switch out every couple of months so he doesn't get bored.
Posted by ~*~The Family~*~ at 12:48 AM

I have never owned a bird, so it will be interesting and fun to read your posts on Bert.