Turns out Bert has a few secrets up his wing 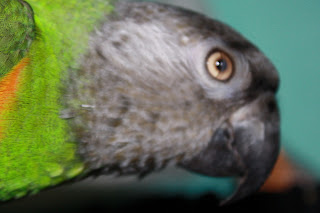 When we took pictures of Bert the other night for his photo shoot, some of the photos showed a covering over part of his eye on quite a few of the pictures.  We had never noticed this before.  A little research found that this is an extra eye lid that lubricates and cleans the eye.  Now Bert does blink his whole eye lid, not as often as a person does, but quite regularly.  I have since stood looking at his eye, watching him like a hawk (bet he doesn't like that word), and cannot, with my bare eye, see this extra eye lid so it must be lightening fast.  The camera takes pictures at a fraction of a second so this is the only way we knew he had this secret eye lid.  It showed up in several of the pictures so he must blink it often. 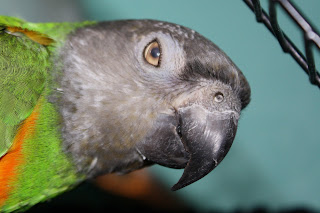 Here is one where it is covering almost his whole eye.  Makes him look quite snarly doesn't it.  I think I am glad we can't see it. 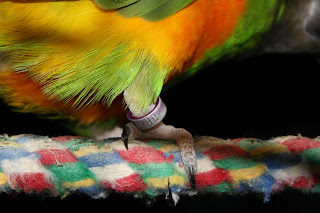 His second secret is his leg band.  This little band tells a lot of information.  Bert's leg band is closed, meaning it was slipped on his foot when he was two to three weeks old and then as he grew it got stuck on his leg.  This tells us that he was a domestic bird from a bird breeder.  In it's prime the band was a dark pink.  From what we can find out, that only tells us that his breeder liked pink, it has no other significance. The band has four initials on it that tells us his breeder was DH, we don't know who this is, but MN tells us he was born and breed right here in good old Minnesota.  His band also has the numbers 96 and 8 on it.  The 96 is his birth year so he is at least 14 years old as of the 31st of this month.  The 8 tells us that he was the 8th bird hatched from a set of parrots or the 8th bird hatched at the breeders depending on how they counted their birds.   He did say "Happy Birthday" a couple of days ago, could he have been trying to tell us something?  He wanted a special birthday peanut perhaps?   We will never know, that he is still keeping a secret.
Posted by ~*~The Family~*~ at 9:34 PM