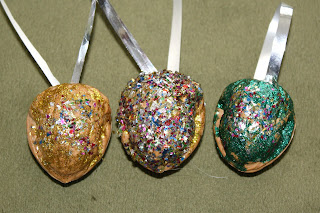 My title of the post pretty much wrapped up the project.

If you crack nuts during the holidays, this is a nice thing to do with the shells.  I remember as a kid we had a coffee can decorated with felt to look like Santa's boot on the coffee table and every night we would crack some nuts.  Over the years we could have made enough of these to cover several trees.

With our kids, when they were younger, I would give them a bag of nuts and a nut cracker and they would sit and crack them for an activity to keep them busy.  There seems to be something satisfying about cracking nuts and digging out the meats, especially if you get one out whole.  We seem to be easily entertained here.

Well, on to the ornament.  First, we cracked the walnuts open and took out the meat.  This was the hardest part as we had trouble getting the shells to crack perfectly in half, they kept wanting to break on the sides.  We had the best luck when we took a butter knife, slid it down the middle of a nut and then twisted it.

The kids spread glitter glue on the outside of the nut and then dipped them in glitter.  I thought they could paint them but they brought out the glitter instead so we went with that.

After the glue dried we ran a line of Tacky glue along the rim of the nut, put the hanger (curling ribbon in our case) between the two halves and stuck them together.

As I was writing this, I thought that it would be cool to leave the materials out all season and have everyone assigned a color and tally them up after Christmas to see who had the most walnuts perfectly cracked.   I think we would paint them if we had this out all season or there would probably we glitter around until July.
Posted by ~*~The Family~*~ at 3:17 PM