Wii will be fit update

January 7th was when we started our big Wii Fit workout plan and I tell you, I was hoping for big results but expecting what I usually accomplished when I start such things, nothing.  We all started out pretty good and then I dropped the bike riding part and the kids, for the most part, dropped the Wii Fit part.  All of us dropped the lifting weights part.  I did manage to loose, with my minimal effort, five pounds in January.  I think most of that came off from lack of Christmas goodies.
Along came February and I decided kick the exercising back into gear and work on our diet.  I started burning off 400 calories a day, up from the 200 in January, on the Wii Fit using the free step game.  I like this game because you set it up on the Wii and then can turn back to the t.v. and do it in 30 minute sessions while watching t.v.  For a little over 400 calories I needed to do an hour and a half every day but I  watch at least an hour of news so it fit well into my schedule.  I also made sure that the kids were consistently riding the bike.  We were having great success the beginning of the month and then I needed to go into the doctor.  A doctor who had lost forty pounds.  Tell me your secrets I asked her.  She said a protein breakfast, no sugar and no snacking at night.  Sounded simple enough and she lost forty pounds, gee, I want to lose forty pounds.  Turns out she had great advice, I have now lost 18 pounds since January 7th, Dancer 6 pounds and Spark 2 pounds.  Dancer and Spark aren't near as strict with their diet as I am but they have cut way back on the sugar and are drinking a lot more water.  Dancer has also been sick the last week and so she hasn't been doing to much except blowing her nose.    One thing I realized was that we snacked a lot and not on good choices.  Also with Dad working nights, and being use to eating his lunch at about 2:00 a.m., that he is on a different eating schedule than we are.  The nights he was home I would snack with him again even later in the evening.  Actually, it wasn't usually a snack, it was more like a mini meal on my part.  The only sad part is I can really see that Dancer is firming up and her clothes fit differently, but me, can't tell I have lost a pound.  Well, except in my feet, but who looks at someones feet and says "Wow, your feet look great, have you lost weight?"  In real life no one ever sees my feet, it isn't even sandal weather for another three months.
Tonight I just didn't feel like doing the free step on the Wii so I pulled out this DVD. 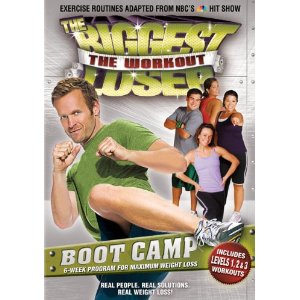 We got this last summer and when I tried it I couldn't even get through the five minute warm up.  Yes, pathetic I know.   I just wanted to see after all the stepping I have been doing if it has made any difference.  Tonight I made it through not only the warm up but also the first 20 minute workout and the cool down.  Unfortunately, I wasn't able to do the weights very long before my muscles were screaming out "What are you thinking!!!!" and I dropped them like hot rocks.  Spark did it with me but he was able to do the whole workout last summer.  All that stepping on the Wii Fit has paid off.

I see this is a six week program so I hope to be able to use the weights the whole time, add in the other 35 minutes of the workout and get Spark to do it with me everyday, maybe even Dancer, by the time six weeks are up.   I plan to add this most days and keep up 200 calories burned on the Wii Fit.  All this while crossing my fingers the scale keeps moving the right direction.  Maybe I can even be like the lady that lost 80 pounds.
Posted by ~*~The Family~*~ at 9:02 PM

Go you! I think it's great you've lost 18 lbs.! And kudos to the kids as well! I'm glad you didn't give up in spite of the setback. I've been doing a lot of reading myself on weight loss lately. I never lost the weight after my last pregnancy and had a couple of physical setbacks, but you all inspired me and I've been working hard since the beginning of February. From my past life, I know that you need muscle toning as much as the cardio. Muscle will burn fat for you, even when you rest.

Keep up the great work! You are doing great!