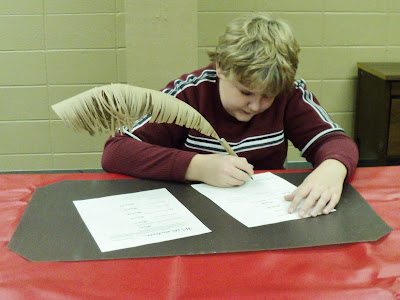 Our co-op is studying government and elections this fall.  After learning about the constitutional convention and how our founding fathers, except for Ben Franklin, didn't believe in bathing making it a very stinky convention, we wrote our own classroom constitution.  The kids decided that we would have a signing just like the founding fathers.  I typed the constitution and printed it on fancy paper changing words in the preamble and end to reflect our classroom instead of the United States, the kids dressed up, we had a "feather pen" and signing ceremony.
To make the feather pen I used a piece of craft paper that was 18 inches by 7 inches and cut it out in the shape of a large feather.  Making tiny cuts all the way down the sides made it resemble a fancy feather they would have dipped in the ink to write with.  To keep its shape I hot glued a wire down the length of the inside of the feather and then on to a pen, finally covering the pen with craft paper.  This made the pen really heavy and hard to write with but the kids all opted to us it instead of a regular pen. 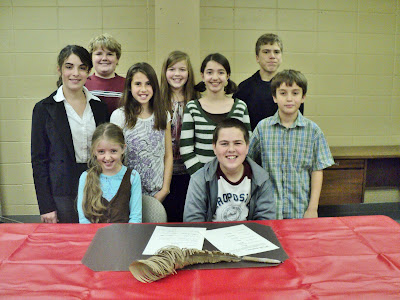 The founding fathers of our classroom constitution. 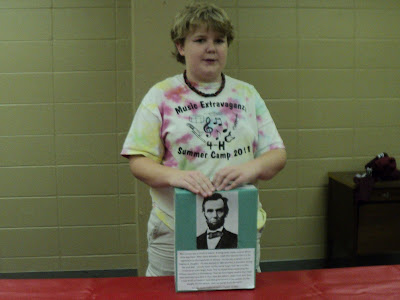 Our next topic is going to be the Executive Branch of the government and we started out by learning about presidents.  Each of the kids picked a president and made a box of information.  On the boxes they put facts, quotes, interesting trivia, pictures, a time line of their life and anything else they wanted to add about their chosen president.  Then in class they each had a few minutes to present the information on their boxes.  They impressed me, we have a class of good public speakers :)  This is Spark giving his presentation and I just noticed his dress up sweater didn't stay on very long, I see it is in a ball on the desk behind him.  He is all about comfort. 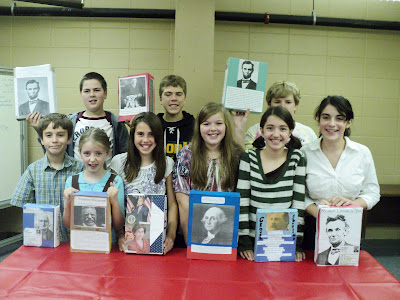 It was interesting that out of the list of all the presidents the kids only chose five different ones and only one chose a president after the invention of color film.  And even with all that overlap we had very little duplication of information.