We celebrate and celebrated Valentine's Day this year over the course of four days.
It started out on Monday night at the 4-H meeting.  They exchanged Valentine's, made crayon wax paper hearts, and decorated cookies which ended with a cookie decorating contest.
Tuesday was a Valentine exchange and snacks with the kids at co-op.  They needed Valentine boxes for the exchange. 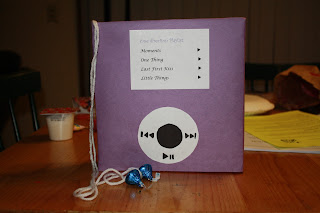 Dancer made an ipod complete with Hersey kiss earbuds and a One Direction play list.  Her box was pretty fancy and very carefully constructed. 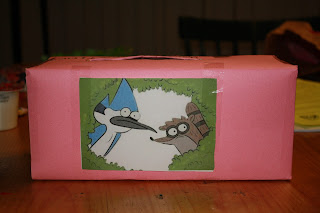 Spark took a cracker box and jabbed a slit in the top and was about to call it good until I told him that just wasn't going to fly.  He really needed to decorate it.  He found some pink paper to cover it and put a picture of Mordecai and Rigby on one side and Finn and Jake on the other.
﻿ 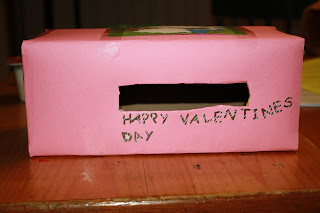 With stickers he put Happy Valentine's Day on the top.  Sweet and to the point.

Wednesday they had another co-op party with Valentine exchange, craft projects and supper.  Dad took them to this one as I had to take Grandpa Bob to a doctors appointment.  This worked out okay though because since he doesn't work the normal 9-5 Monday to Friday job he can hold his own pretty well with a group of moms.  I don't think it hurts that most of his nursing co-workers are women and they don't seem to hold back any subject when he is around.

Today, finally the actual Valentine's Day, we gave the kids gifts.  Dancer got a box full of socks (she loves socks) and Spark got a DVD.  Dad and I exchanged cards and I even got a card from the dog Nikki (she usually gives cute cards for all occasions.)  We went out to lunch at Pizza Ranch where oddly enough we knew everyone there except a few tables that were having a meeting.  After lunch we went shopping to buy Dancer new pants because Dad was goofing around and tipped her Dr. Pepper float all over her lap.  There are two sides to every story says the Dad.  Dancer and the
Mom were having some poking fight about which television shows are, and are not hilarious.  The ultra responsible Dad tried to move a Dr Pepper float to a safe area and it was tipped over in the ensuing melee.  Oddly, Spark was the calm one who just sat there watching the madness.

The kids got so much candy that it looks like they were trick or treating so once that is gone in a few days Valentine's Day will be complete.

I'm curious as to what show started the Dr. Pepper mess. ;)