Keep Him Calm They Said

Skips went to the vet yesterday like the cat he is - howling, darting his arms in and out of the front of the kennel, and before we stopped in front of the vet building, managing to tip the kennel over even though it was wedge on the back seat.
There were no "Good luck Skips,"  "we love you Skips" or "just let me give him one more snuggle before you take him in the back."  Instead, I thrust the kennel into the ladie's hands and said, "Here"  hoping this whole neutering business was going to miraculously have him turn into a calm, new kitten by the time we picked him up today. 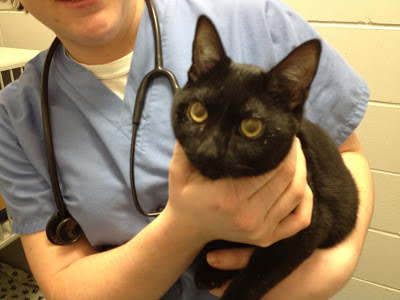 Our vet sends updates via email photos and we waited all day to find the message in our inbox that he had made it through the surgery and was on his way to becoming a fine, young cat.  But as you can see in the photo, which didn't come until late afternoon, she is holding his head and the front of his shoulders pretty firmly.  I scanned down for her other hand, it doesn't have a death grip on his back legs so I told myself the hand around his head was to make him look into the camera.

Last night it snowed yet again, and when Dad came home from work he said that the roads were equivalent to a glazed doughnut.  When I said then I would wait until later to get Skips because maybe the roads would be better, he objected.  "But I miss him," he said as he was heading out the door with the kennel in hand.

At the vet they brought out Skips and asked if Dad wanted to pet him.  The tight grip she had on him made Dad say to just put him in the kennel and they would re bond after he got Skips home.  Their parting words were to keep Skips calm for the next couple of days so he could recuperate and heal. Ha, that is a good one.  Did they not observe this cat the two days he was there or do they say that to everyone?  Dad said he howled all the way home while hanging upside down to the top of the kennel.  The minute he got home he shot of the kennel, into Dancer's room, down the basement, in the laundry room, in the kitchen, back into Dancer's room, behind the couch and all the places he lurks.  He had a good tussle with Mr. Fluffles and Nikki.  Seeming satisfied that everything was as it should be he finally stopped to eat.  The rest of the afternoon has been spent antagonizing the dog, his favorite sport, and he seems like he has to make up for the day he missed.  Yeah, keep him calm, he is just as crazy as he was before.  As an aside, they did say it can take up to four weeks for all the testosterone to get out of his system.  Great.

I think Dad loves this cat because he is so aloof.  He is not a lap cat, he doesn't like to be picked up and more than a couple scratches to the top of his head when his feet are firmly on the floor are more than enough attention for him.  He is very much like our first cat, Sushi, who was a cantankerous thing until he had a few days at the vet with crystals in his bladder which turned him into the friendliest cat ever.  I am still holding out hope for Skips.
Posted by ~*~The Family~*~ at 4:54 PM

His face is priceless! You get the feeling he knows what's coming.

I have had cats like him. I hope everything he needed done was done, because getting him back into that carrier is going to be a family project. We had a cat that so hated the carrier, she would turn into the Tasmanian Devil if you tried to put her in it!