Our county 4-H is trying to get llamas started at the fair since, at this point, the county is llamaless in the 4-H barns.  The county next to us has a lot of llamas and one of the families who show just happen to be in our homeschool co-op.  When we went to their house to carve pumpkins this fall, Dad showed interest in their llamas and they hooked us up with two girls that were born back in July of last year.  While we knew for a while now that they were waiting for us, it wasn't until today that we were able to get them. 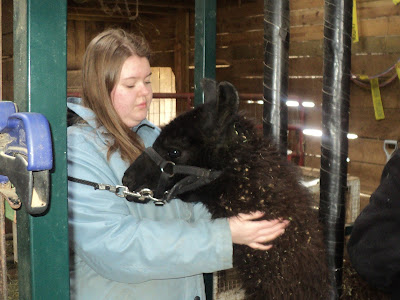 Another llama family had the University of Minnesota vets and interns come out to their farm and have a llama clinic today.  They did immunizations, hoof trimming, neutering and even a minor operation.  Our new girls were brought to the clinic and we picked them up.  They have not been worked with at all, they weren't even named, so they are very afraid of everyone.  This is Dancer meeting her new llama during its exam.  She named her Nora. 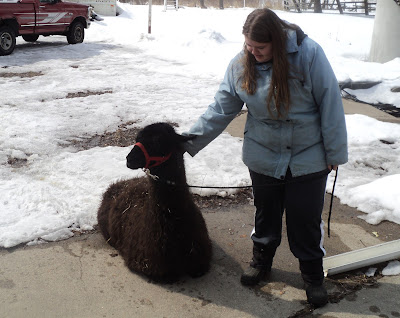 We borrowed a trailer to bring them home in and needed to get the trailer back so the family we borrowed it from could get their llamas home.  Needing to get the trailer back and Dad needing to lie down for a nap befoe work gave us a bit of a time crunch since we also had an hour of drive time.  The kids at the clinic got the llamas in the trailer with not much ado.  While we can't drive back to the barn at our house because our yard is still full of snow, what happened when we got home we were not expecting.  Dancer's llama seemed like the mellower of the two so we took her out first and started to bring her up to the barn.  She got as far as the cement part of the driveway and lied down.  When coaxing her did nothing, we called back to the clinic and asked for advice.  Pick up her back end and she will pop up they told us with such matter a factness that we thought our plight was over.  We picked up her back end and she rolled over on her side with her legs sticking straight out.  As soon as we let go, she rolled back on her tummy and tucked her legs firmly under her.  Thankfully, the dog barked and that got her up and few feet up the driveway and when the garbage truck came by we got a few more feet.  By then she was on the ice between the house and the garage and we just got a sled, wiggled it under her and pulled her back to the barn.  It still wasn't smooth sailing, this whole fiasco took about 45 minutes but, we did get her to the barn and in her new home.  I should have taken a picture of her on the sled but, this was a lot of work for a middle aged, out of shape woman who spent way to much time sitting around this winter. 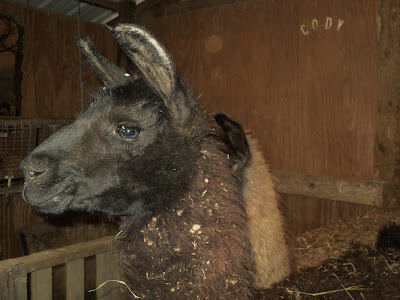 Once Nora was in the barn we took a deep, deep breath and went back to the trailer for round two of "Get the Llama to the Barn."  By the way, everyone told us llamas aren't near as stubborn as goats.  Leave it up to us to get the last two stubborn llamas on earth.  Goats are stubborn but, at least they are small enough that you can pick them up without the assistance of two men and small boy.  One man and a small boy is sufficient. 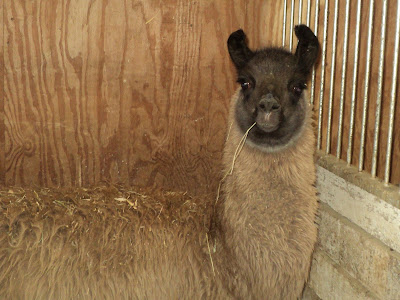 Back at the trailer, we clipped a lead on to Spark's llama, Marceline.   She jumped out of the trailer, sprang up the driveway, around the corner, down the path and into the barn.  Okay, so we only have the last stubborn llama on earth, not the last two.

Now that they are in the barn, the kids need to start working with them.  The first thing they need to do is get them use to being touched and they had good success with that the couple of times they were out there this evening.  Next will be to get the harnesses on them and then start teaching them to walk on a lead.
Posted by ~*~The Family~*~ at 10:32 PM

LOL! You should have asked me. I worked with goats and llamas at the zoo and I prefer the goats. They are friendlier and don't spit in your face. :o)

Too bad you didn't get a picture of the llama getting a sleigh ride!