Girls are from Venus...

Girls are from Venus, Boys are from Mars or so it seems.

The big white board has been up in the living room for school and the kids spend some of their free time drawing pictures, playing hangman etc. This day Dancer had drawn a cute duck on her side of the board and Spark made a robot on his side. 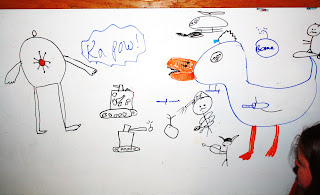 After a few minutes, Spark's robot had army tanks accompanying it. Yes, they had fired on the duck. A classic example of an arms race soon developed.

The picture above shows the robot had added a helicopter, assorted bombs and appears to be taking a duckling hostage. You can now see Dancer's "cute little duck" has machine guns mounted on it's wings, a torpedo launching tail, guided rockets under it's chin, and a Viking companion with a flamethrower. A later, even more gruesome look, would show Dancer's hideous three headed, forked tongued worm had burrowed under the robot. Oh, and look, our little angel's duck has grown fangs!!

With a nine year old boy in the house virtually any activity can become very competitive and even an epic battle.

Thanks so much for the comment and the birthday wishes!