Our reading lately has been focused on English Knights. Knights, when they weren't fighting, were a horrible lot. They harassed peasants, ruined property, ransacked monasteries and churches, stole from people and killed their animals. A lot like Vikings those scoundrel knights were. To combat this behavior, the church told the knights that they were also to defend the church, protect the weak, assist in upholding the law of the land, and have good manners. One of those manners was when they were eating they should spit under the table instead of on it. The main thing they were to do was to protect women and be chivalrous. There was a little system in place to ensure that they did what they were suppose to be doing. When knights were going to enter a tournament, they would grab their coat of arms and parade, on their horses, in front of all the ladies. If a lady saw the coat of arms of a knight who had been less than chivalrous to her he would be pulled from the tournament and not allowed to compete. The coat of arms also acted as a name tag during a battle because their fellow knights would know who was who from glancing at their coat of arms and determine if they were friend or foe. The kids both made a coat of arms with the criteria being that if we looked at it we would quickly be able to see who they were. 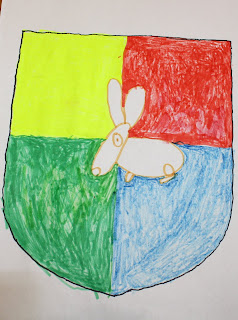 Spark's coat of arms. You will know me by my coat of arms by knowing a little about the symbol I put on it. As you can see, in the middle is a rabbit. It could either be Scott or Creamy because they are both brown and I didn't color in the inside so it could be both of the rabbits. The colors I chose are because they are the main colors and they bright so that they show up well. The yellow I did with a highlighter so it would be really bright and you could notice all the other colors by it. 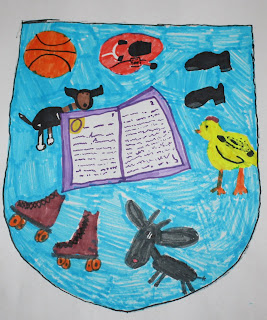 Dancer's coat of arms. This is my coat of arms and you will be able to tell that it is me even if I was wearing full armor because it has all the things I like on it. On the top left is a basketball. I like to play basketball and I really miss not being on a team this year. I am glad my brother is playing so I still get to go to games. On the top middle is a lawn mower. I love to mow lawn, I do some of my best singing when I am on the mower going around and around the yard. Next to that on the top right is a pair of tap shoes. I love to dance and tap is my favorite style of dance. I would be happy if I got to tap dance every single day of the year. Underneath the tap shoes is Ballina my favorite chicken. She the runt of the barnyard flock. She likes to be held, petted and fed rabbit food out of my hand. I know she is a chicken but she still likes rabbit food. To the left of Ballina is a book and Nikki. I put a book big in the middle because I love to read so much. I put Nikki by the book because I didn't have much room to put her on the coat of arms without her being sideways and she is usually by me when I read. Lower left is roller skates. Lower right is Eeyore my goat. I put him on there because my life just wouldn't be my life without Eeyore. He is so cute and I play with him every day. Even though he is getting quite big he still likes to climb from the milking stand onto my lap to sit and nuzzle.
Posted by ~*~The Family~*~ at 1:08 PM