The weekend was just nonstop from Friday to Sunday.
-
Our church showed the movie "The Secrets of Jonathan Sperry." Don't miss this movie if you get a chance to see it. I was part of the group that did the preplanning and therefore was part of the set up, working the event and the take down. Since it was the first time the movie was to be shown in our state we did a red carpet premiere theme. There was a dinner before hand, which was like a concession area of a movie theater. We had a doorman who was wearing a top hat, tails, white gloves and spats. Once he opened the door for the people to go into the entry way of the church they were on the red carpet like they were movie stars. There were kids yelling for autographs, cameras flashing and peacemakers (body guards) to keep back the crazy fans. Once they were in the sanctuary where the movie was shown the youth band played and they could win VIP tickets to sit in the front rows and get a prize. We showed the movie both Friday and Saturday night. It was a success, we had over 250 people which is a lot for our little town. So Friday was set up for the movie, the movie and clean for the next night.

Saturday Spark had a basketball tournament early in the morning about an hour from our house so we were up at the crack of dawn and on the road. His team won three game and lost two. When he was done playing they had a chance to get third place and medal depending on who won the last game. Since a medal could be in his future we stayed and watched the game. The wrong team won for them to take third so they were fourth overall. The teams went into over time and then sudden death to have a winner. A pretty big deal for a third grade team. We didn't get home until almost 4:00 and then had to be at church at 4:15. That gave us enough time to change and jump back in the car.
Another showing of the movie and then we had to take down all the decorations and put everything back in the church so it would be ready to go for Sunday morning. It was quite late by the time we got home and then we had to go out and do chores.
-
Sunday morning we had an early appointment to have our taxes done. It is about a 40 minute drive to get to the accountant so we were up and out of here by 7:20. We let the kids sleep in so Dad and I went out to breakfast all by ourselves after the appoinment. That is a rare occurrence for the two of us to do anything alone.
-
When we got back home about 10:30 I flopped in to bed and fell asleep instantly. I woke up at 1:00 and flew out of bed because we had our 4-H Valentine, bowling, pizza party at 2:00 and no one had gotten me up. Dancer and I still needed showers and we needed to leave no later than 1:40 to be there on time so it was a crazy half hour. 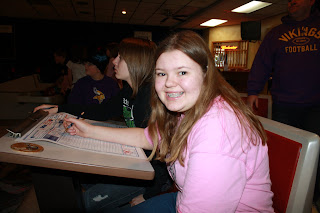 The bowling alley we went to didn't have automatic score keepers so the kids got a quick lesson in how to keep a bowling score sheet. 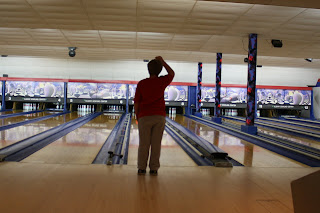 Spark had the high game for everyone who bowled, 121 points, so he won a prize. There was also a prize for the low score, that game was 5 points bowled by a kindergartner. She was pretty happy with her score when she realized it won her a box of DOTS candy. They also got a pencil if they rolled a strike and Spark got one of those too. The kids exchanged Valentine's so there was plenty of candy to go around.
-
Grandma came by to watch the bowling and brought us a hotdish for supper. Bless her heart, it was much appreciated because we got home 15 minutes before we needed to get Dad up for work. There was enough that I sent some with him to work and didn't have to make him lunch either. I was more than happy to get home and just sit down!
Posted by ~*~The Family~*~ at 10:44 PM