When the kids were little we used to spend a day cooking for the month, freeze the meals, and then not have to cook the rest of the month. I don't do that anymore. I do cook up hamburger when we buy beef and have it waiting in the freezer all browned but that is as close to once a month cooking as I get anymore. Last week, when I made meals to bring to my parents after my dad's surgery, we had ready made meals for the week. This was so nice. Everyday about three o'clock I start thinking about the question that puts fear into mothers, "What to make for dinner that the family will find appealing and won't be a ton of work or clean up?" Enjoying answering this question last week, because a dinner was waiting in the fridge, Monday morning I cooked up a bunch of main dishes again. 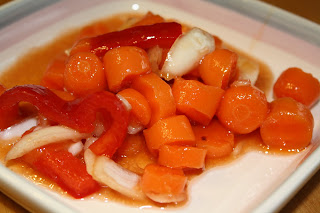 My mom made these a lot when I was a kid, but for some reason I have never thought to make them before this week. We had them as our side dish/salad.

Cook the carrots until tender but do not over cook. Mix everything together in a big bowl and put in fridge for 12 hours before eating.

This is a new recipe for us and it turned out soooo good. I served it with mashed potatoes but because of the sweetness, next time I will serve it over rice. 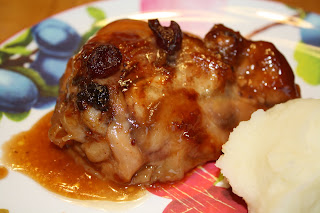 Grease 9x13 pan. Combine cranberry, salad dressing and soup mix. Coat the chicken with mixture before putting in pan. Pour rest of mixture over chicken pieces in the pan. Cover and bake at 350 degree for 1 1/2 to 1 3/4 hours. Remove cover last 15 minutes of baking. 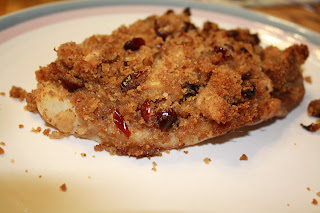 Another new recipe for us and it didn't disappoint.

Season chops with salt and pepper.

Bake 350 for about 1 1/2 hours or until pork chops are tender. Cover half the time of baking so stuffing doesn't get too brown.

This is a dish we have a lot. It is simple and tasty but not pretty enough to warrant a picture.

Butter baking dish. Place pork chops in the bottom of the dish. Cover with sliced potatoes and onions until you can't see the pork chops or for as much potatoes you would need for the meal. Pour a can reconstituted Cream of Mushroom soup over the top. Bake at 350 until potatoes and pork chops are tender.

Dad made up a crock pot full of Hoppin' John. This is pretty much a staple dish at our house so the recipe is over on the right column under our favorite recipe list. Spark will even ask for a bowl of this for a bed time snack.

I made big pot of chili. This is nice for a quick lunch that doesn't disrupt our day. Dad also likes to take it to work for his lunch. Eating at the hospital is expensive so he takes lunch with him every night. I don't have a recipe for chili, I just dump the components into a pot and let it simmer for a few hours. I put in: hamburger, onion, tomato sauce, chopped tomatoes, chili spices, and garlic. During the last hour of simmering I put in a couple cans of kidney or chili beans. If we are having it as Chili Mac, I will add some pasta and extra water the last half hour of cooking. If the pasta is added to early it just cooks down into the sauce and disappears. We like to eat it with shredded cheese, a dolp of sour cream and a stack of crackers.