One of the wonderful moms in our homeschool group organized a field trip to the Mall of America Underwater Adventures. We had never been before because to just go there not in a group would be over well $100 for our family to see the aquarium and the behind the scenes area. With the group it was $30 so we really couldn't not go for that price. We didn't need to be there until 11:00 so we didn't need to leave too early, it only takes us a couple of hours to get there. 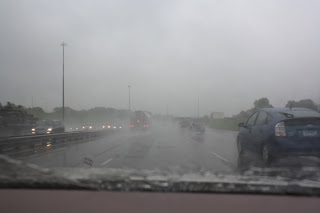 We left earlier than we needed to, which turned out to be a good thing, because most of the driving was in this weather which made it slow going. There was also construction which made part of the trip very slow going. 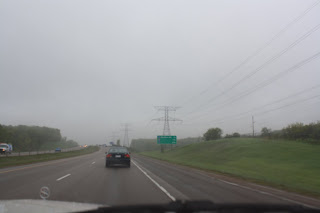 Dad took this picture of the power lines. They remind me of something out of a science fiction movie from the 70's, big robots marching over the hills through civilization.

The aquarium part of the tour was self led which was good for us, we always seem to need more time than everyone else to look at everything. All other families were done and we were still plugging along looking everything over. 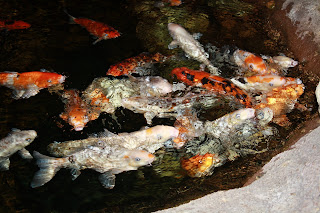 These Koi know the hand that feeds them. They lay lurking in the water and when they saw people coming they would start flipping around like this. Not wanting to disappoint them, we bought a handful of food. 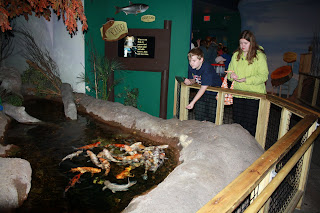 The kids throwing food pellets into the koi. Dancer though this part was really cool. 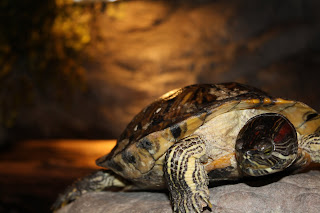 This handsome turtle was in a display with scads of other turtles. All together they were strikingly beautiful swimming and diving. This guy must have been taking a break, he was up front greeting people as they came in. He would turn his head back and forth and flex his legs around like he was posing for the camera. This was his best side. 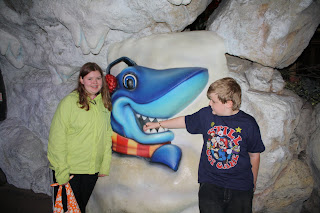 This shark is the mascot for Underwater Adventures. Dressed perfectly for our climate, ear muffs and a scarf. 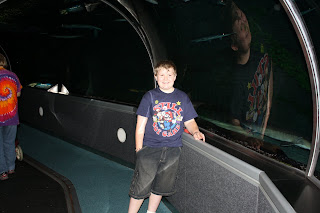 We walked through tunnels for part of the tour. It was like being in the tanks with the fish. I loved how this picture of Spark turned out where he was reflected on the side of the tunnel. A complete fluke, it was a surprise when we got home and downloaded the pictures. I couldn't have planned a picture like that. 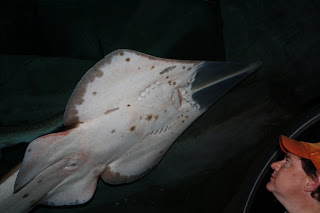 Mr. Ray swam over the top of Dad. It almost seemed like they were putting on a show the way they swam back and forth. 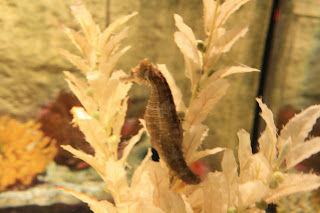 Seahorses give the impression that they live a very serene life, at least in this tank where they have no predators or under currents to deal with. 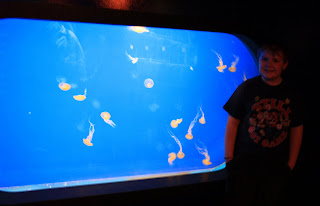 There was a whole room with nothing but jelly fish in tanks and tall cylinders. The room was all dark except for the jellyfish. 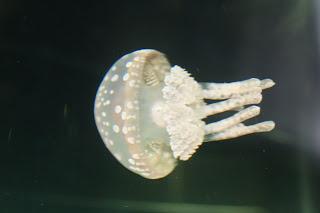 There was this really hypnotic underwater sounding music that made you feel like you should dance and pulse with the jellyfish. "When you move like the jellyfish, rhythm don't mean nothing, you go with the flow, you don't stop" 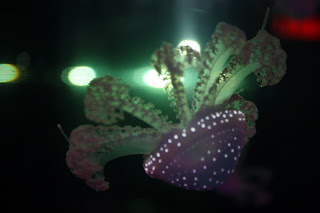 The lights under the tanks kept changing colors which gave them different color hues. Then when we took pictures they would light up like this one. It reminded me of a space ship. 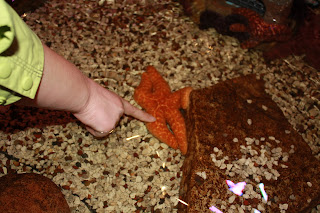 There were touching tanks. Dancer is touching a star fish, which we thought would be soft but they are actually rock hard. Spark thought this one looked like it is hanging out resting it's arm on the rock waiting to talk. 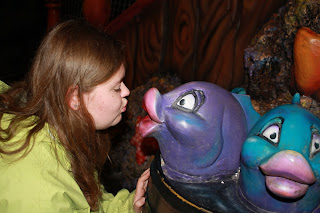 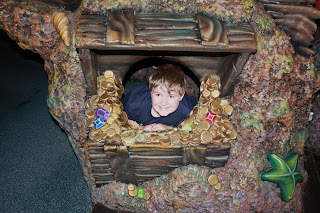 There was a beautiful gem in the treasure chest! We took it home with us. 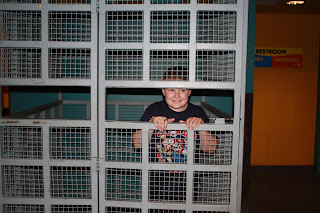 Spark in the shark diving cage. It was very sturdy but I think I would stay out of the water if Jaws was swimming around. No need to temp him.

We also got to go behind the scenes and see the kitchen where the food is all made (they serve retail quality fish to the animals), the lab where the water is tested, the holding tanks for sick animals, babies and ones going to other aquariums and the top of the aquarium. One cool thing on the top of the aquarium was a place for the turtle. They have their own little world up there that isn't visible from the bottom view part. They have logs to sit on, a shelf where they have heat lamps to bask in the heat and a fan that blows little waves over the top of the water that they seemed to enjoy swimming into. 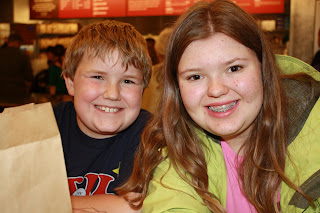 Our wrist band from the aquarium was good for a free taco from Chipolte. Love their food but there always seems to be a communication barrier between us ordering and what we actually get. We were happy to just be eating, it was way past lunch time and we were hungry. Must be why they are smiling so big. 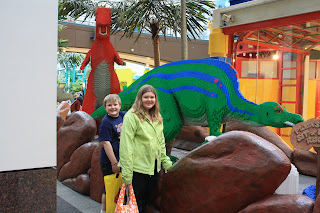 Next stop was Lego Land. We took picture of just a couple of the many displays they have made entirely out of Legos. 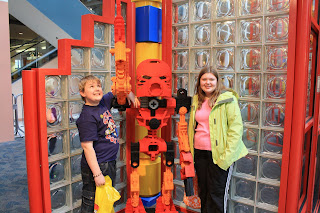 This is kind of hard to see but it is a life size Bionical. 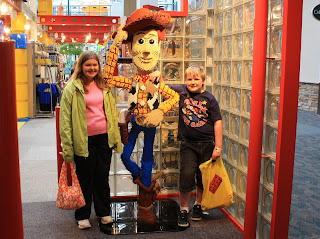 Of course, this is Woody. I love that movie. Both the kids made and bought three Lego people. There were all different pieces and they could put together a head, hat or hair, body, legs and an accessory like a sword, shovel, goblet etc. Spark really loves those little people and Dancer wanted some girl ones. Spark also got a container of pieces. There were containers and however many pieces you could fix in there you could buy for one price. The sales people there were really good about giving hints on how to get more pieces to fix in the container. The said, "use your math skills." He got a nice variety of wheels, axles, eyes, torches, treasure chests, and other odds and ends pieces.

Last year Dancer won wrist bands for Nickelodeon Universe and we had not used them yet so they used them today since we were right there. Nickelodeon Universe is in the middle of the Mall of America, pretty cool, a whole amusement park inside. It wasn't very busy so the kids didn't have to wait in any lines. 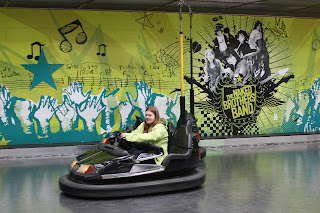 First thing they went on was bumper cars. Spark came out with a bloody mouth. Not sure what happened as we didn't see anything. He had hit his tooth before and knocked it so I was afraid that was going to be it but it wasn't as far as we could tell. I really didn't want to be jiggling his teeth in case it would make it loose if it wasn't. He thought maybe it was his lip but they both looked fine too. 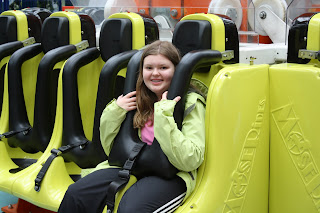 Dancer went on this ride alone because Spark doesn't like heights. It pulled you up four stories and dropped you down to the bottom like you were free falling over and over and over. This is her before the ride started, after she looked green like her coat and was even crying. It wasn't what she expected and she was so upset her legs were shaking. The was the end of most of the rides for her, she did go on a couple mellow ones after that. I told her not to feel bad, the merry go round makes me feel woozy. 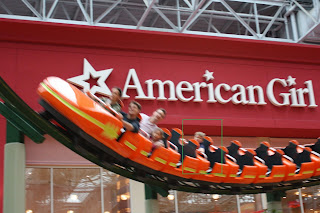 Spark rode this roller coaster that went all around the park about five times. He is the one in the square. He said that the American Girl store's sign ruined his picture but that was the only place that was low enough were you could see the faces of the riders. 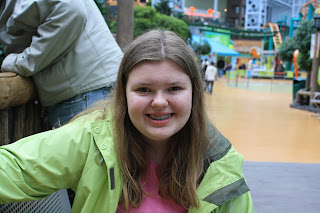 Still not able to go on the rides, Dancer sat with me and held down the benches when they were available. She was looking forward to the rides all week but decided she just couldn't stomach most of them. Next time. 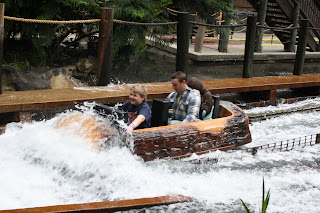 The very last thing was Spark going on the Log Chute. This log car winds around on a little river with scenes of lumber jacks and Paul Bunyan with Babe his blue ox. The ride ends by the log plunging down a ramp and splashing into the water. This was the last thing because after riding it you are wet. He was still damp when we got home.
Posted by ~*~The Family~*~ at 10:48 PM

How fun! I wanna go! I love the aquariums because all those creatures amaze me!

Oh, We are always the last ones through anything also! It just happens that way. It is like we have to savor each and every little thing before moving on.