Our first field trip was a printing company where they print newspapers.  We a  newspapers every week that has just ads in it.  It is where you can find hay and other farm equipment, lawn mowers, trucks, or just about anything else you would ever want to buy listed.  We advertise our goats for sale in it.  Dad, along with every rural man within a 100 miles, loves this paper and waits with anticipation every week for it to be delivered in our box.  This paper is printed here so Dad was pretty excited to see the birth place of his beloved Peach.  This picture shows how they put the inserts into papers. 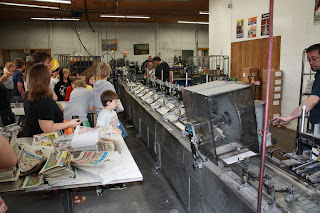 This is the paper on the printing press.  I had to hold myself back from yelling "STOP THE PRESSES!!!"  I always thought that would be such a cool thing to do. 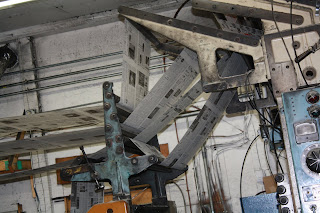 Dad was holding the camera, would randomly take pictures of Dancer without looking through the view finder.  She was not amused. 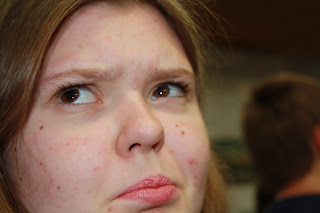 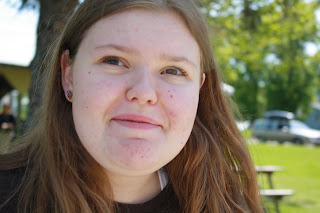 Between the printing tour and the next tour everyone went to a park for lunch.  By the time we got to the picnic Dancer had accepted that Dad, who sometimes acts like my third child, was just annoying and she would start smiling when he came around with the camera.  This huge tree was at the park where we were picnicking.  It was so huge it took four adults to reach around it.  Dad is posing next to it's splendor, which was over 20 feet around. 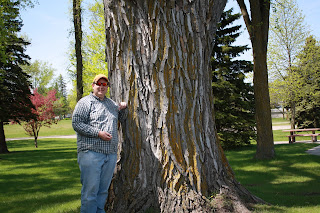 Next we were off to see a Viking Runestone.  There is a museum in Alexandria that has one and also a lot of artifacts of the town such as things from the old doctors and dentist office, buggys, telephone office, homes, general store, black smith.  There was large display of Indian beaded work and a taxidermy display of animals native to Minnesota.
Our little Swedes right there in the Viking camp. 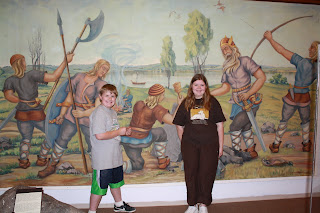 This is the Kensington Runestone that was found near Alexandria by a farmer preparing his field for planting.  It is called a runestone because the Viking letters are called runes.  Each rune is made with straight lines and sharp angles.  The runes were made this way becuase it made it easier to carve them in a stone than curved letters would have been.  When it was found there was some speculation of it's authenticity.  One family member left, never to return to the area, and another commited suicide because the debate and how the family was treated after it's discovery.  Since then, through scientific research,  it has been decided that it is indeed a true Viking runestone. 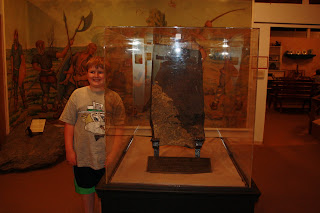 The Vikings would put these hooks in large rocks to anchor their ships to the shore.  Spark thought he would be lucky if he were the one who could pull it out.  Didn't happen for him but he tried! 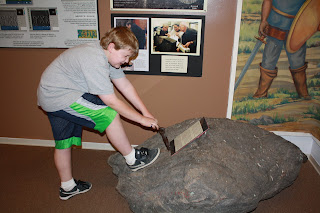 Spark heading into Fort Alexandria on the back of a wagon.  Our car isn't working so well, maybe we should get ourselves one of these. 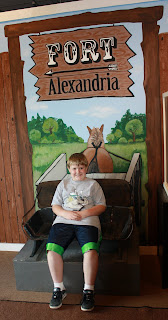 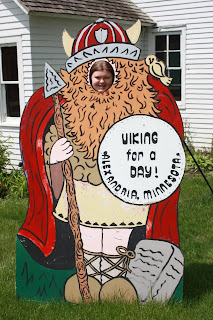 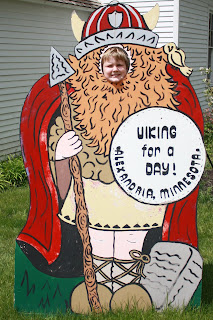 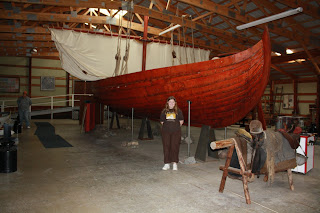 Dancer is standing in front of a Viking ship that is 3/4 the size of an actual Viking ship.  There is no way I would have ever gotten into one of these and headed across the ocean.  I wonder how many Viking are on the bottom of the sea.
Our second picnic of the day was the year end graduation homeschool picnic.  Our homeschool group had 16 graduates this year and there were about 150 people at the picnic.  Always fun to see people we didn't see during the year and catch up.
Posted by ~*~The Family~*~ at 10:36 PM