I'm A Lumberjack And I'm Okay

Last year when we had bad storms we lost a lot of branches.  We cleaned up what seemed like a never ending supply of them but there are a few that never completely broke off of the trees.  It looks awful and makes me nervous that they are going to spontaneously fall on someone, so Dad hooked up a rope to a couple of them an pulled them down with the truck this weekend. Spark was eager to try out the chainsaw so we let him have a go at it. 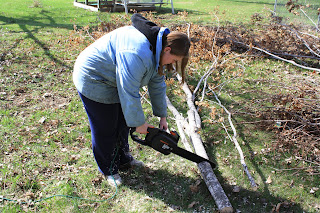 Dancer wanted to give her hand a try at it but she cut one branch and decided it wasn't for her.  Spark took over and kept on cutting.  While he was cutting the rest of us were stacking the burnable wood on the pile for bonfires and the branches behind the barn where we will have to burn them as a brush pile. 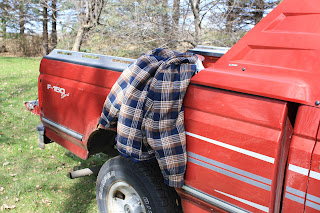 Sign of a working man is when the coat comes off. 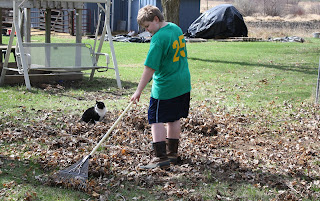 Then to surprise us even more he took the rake in hand and started cleaning up the remaining little twigs and leaves.  He is usually more of a spectator when there is work to be done if we see him at all.  I like this new change! 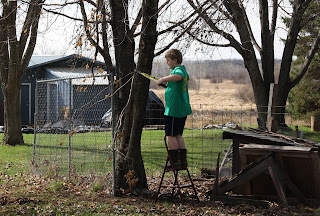 Spying one more smaller branch that was hanging down, he took out the little step ladder, armed himself with the branch clipper and went at it.  I was a little nervous when he came out with the step ladder as we never know what he is going to do.  One time he came in the house and said, "I need a helmet and a cinder block, where do we keep them?"  After that I have always been a little leery of his plans. 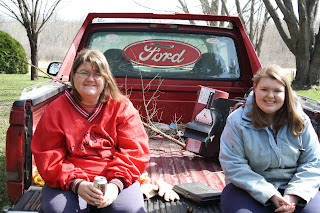 While Spark was struggling with the branch, Dancer and I sat down on the tail gate to watch him and a refreshment. 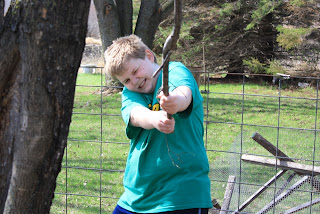 When I went in to shower he was still battling it, claiming that it would "not dupe and/or frustrate" him.  I think it is still hanging on the tree. 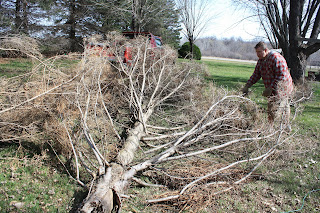 Along with the maple branch Dad pulled down these huge tops off of two pine trees.  These we will cut the branches off and probably haul to the dump when it opens.  Dried pine branches burn just like gasoline and having the fire department out is not something we are real interested in.  The trunk we will cut up for firewood and enjoy the smell of Christmas when we burn it.  It really smelled good from Dad just cutting the branches off.
Posted by ~*~The Family~*~ at 9:49 PM

Now that's hard work! You know "it's on" when the coat comes off!