It has been raining, a lot.  Monday night we had a meeting in town and it poured so hard we could hardly see to drive.  On the way home the roads were covered with frogs (seems way to early for them) and night crawlers.  The ground is still has frost in it so I am sure when it rained their little homes became swimming pools because the water could only seep down so far.

We pulled in the drive way, hit the garage door opener and nothing happened.  We had lost our power. A quick drive around the neighborhood showed that the outage started at our corner and wrapped around the block and went north.  There were a few houses where we could see they were enjoying their evening by candle light so we assumed that they had called the outage in.  We hadn't notice on the way home because the place we go by is a dairy farm and they have a generator, can't lose a whole bulk tank of milk just because the power goes out.

We popped some batteries in the radio and played cards by candle and flashlight.  We still had to do chores, it would be so much easier in the light, so we waited.  By 10:00 it was getting on where we couldn't wait much longer so Dad, thanks to the wonder of cell phones, called the power company.  He had no sooner said our address than the power started back up.  "WOW, you are good," he told the lady.  While he was saying that Spark let out a loud "Woo Hoo," which the lady could hear and echoed his enthusiasm back to Dad.  I am sure they appreciate a happy customer once in a while.  We were thinking "Hello, 21st century!"  This is the second time in a few weeks we have lost power, hope this isn't going to be the theme for the summer.

Now we are on day three of off and on rain so it is getting quite soggy out. 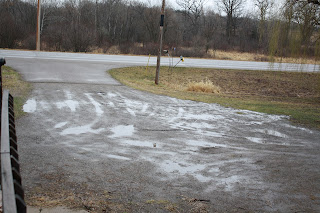 The driveway was wet enough before the rain and now it is even worse.  We have been out their several times a day making little rivers to encourage the water to run off.  It is so saturated that when we drive, or even walk on it, it ripples like a wave. 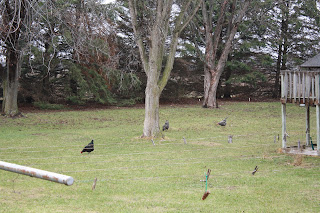 The lawn is really greening up, it seems so strange to see another color outside after all the months of brown and white.  It is getting green except for the dark part back by the trees where it looks brown.  Not really brown, the chickens have been back there scratching up worms.  We won't need to worry about aerating the yard this spring.  Actually that is a laugh, we don't worry about aerating the yard.  Of all there is to do, the grass, besides keeping it mowed, is so not on the top of our list of priorities. 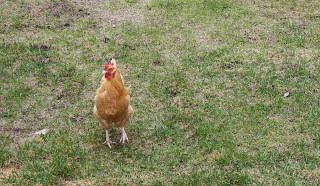 Here is one of the culprits up close.  Whenever they see me out on the deck they come running over to see if I am going to throw out a treat for them so I am sure she (this is Paige) was disappointed when all she got was her picture taken.
If April showers bring May flowers, what are all these March showers going to bring?
Posted by ~*~The Family~*~ at 1:02 PM

No fun to lose power! I keep wondering what will happen here when that happens, since we have heat lamps on the baby pigs! I too am wondering about these March showers...we may need to write a new rhyme...